Robert B. Parker became one of my go-to authors almost two decades ago after I read my first Parker book. I’ve enjoyed reading his Jesse Stone, Sunny Randall, and particularly his Spenser novels. Then, sadly, Parker died in 2010. To my delight and that of many of his fans, his heirs and publishers found and commissioned other authors to continue those popular series and Parker’s legacy.

I’ve read all thirty-nine of the Spenser books written by Parker, and his fortieth, Silent Night (2011), unfinished at the time of his death. His longtime agent, Helen Brann, completed that one. Yes, a few books felt a little formulaic and tired. But I can’t recall disliking any of them, and kept buying and reading them. So it thrilled me when the Robert B. Parker estate chose award-winning author Ace Atkins (The Ranger, 2011, etc.) to continue the series. I just wasn’t ready to give up Spenser.

Atkins’ first Spenser novel, Lullaby (2012), was a very readable, well-written book. But despite the ravings of the New York City reviewers, the transition from Parker to Atkins wasn’t nearly as seamless as they claimed. Atkins didn’t quite capture the essence of the character in that first novel and Spenser just didn’t seem like Spenser. But with each new installment, Atkins improved his interpretations of Spenser and the other characters until his Spenser versions became virtually indistinguishable from the originals. That’s why it disappointed me to read on Atkins’ Twitter feed that Bye Bye Baby, his tenth Spenser novel, is his last, since he feels it’s time to turn his attention to other projects. 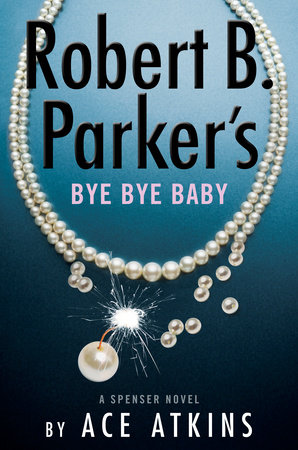 Carolina Garcia-Ramirez is a rising star in national politics, taking on the establishment with her progressive agenda. Tough, outspoken, and driven, the young congresswoman has ignited a new conversation in Boston about race, poverty, health care, and the environment. Now facing her second campaign, she finds herself not only fighting a tight primary with an old guard challenger but also contending with numerous death threats coming from hundreds of suspects.

When her chief of staff reaches out to Spenser for security and help finding the culprits of what he believes to be the most credible threats, Garcia-Ramirez is less than thrilled. Since her first grassroots run, she’s used to the antipathy and intimidation women of color often face when seeking power. To her, it’s all noise. But it turns out an FBI agent disagrees, warning Spenser that Garcia-Ramirez might be in real danger this time.

It doesn’t take long for Spenser to cross paths with an extremist group called The Minutemen, led by a wealthy Harvard grad named Bishop Graves. Although Graves is a social media sensation, pushing an agenda of white supremacy and toxic masculinity, he denies he’s behind the attacks. As the primary nears and threats become a deadly plot, it’s up to Spenser, Hawk, and a surprise trusted ally to ensure the congresswoman is safe. This is Spenser doing what he does best, living by a personal code and moral compass that can’t ever be broken.

Kyle Rosen, chief of staff for Congresswoman Carolina Garcia-Ramirez, hires Spenser, the consummate knight errant Boston P. I. to provide security and help identify those who represent the most credible threats to the congresswoman’s safety. Garcia-Ramirez, an outspoken rising star in national politics on the eve of a tight primary, has received many death threats in response to her progressive and liberal agenda centered on race, poverty, health care, and the environment. An exchange between Spenser and a reporter (Wayne Cosgrove) in Chapter 6 outlines the congresswoman’s agenda.

“She [Garcia-Ramirez] also knows I have a realistic view of her agenda.”

“Where do I start?” Cosgrove said. “Free college and healthcare for all, a living and respectable minimum wage, a green Boston with zero carbon emissions, a massive restructuring of law enforcement. All great talking points, but how much can she realistically accomplish for her district?”

Reminiscent of Rachel Wallace (Looking for Rachel Wallace, 1980), when her publisher, John Ticknor, hired Spenser for a similar assignment, the fearless and self-directed Garcia-Ramirez is less than thrilled about Rosen hiring Spenser to protect her. She resists the idea, but as he did with Wallace, Spenser wins her over. He and longtime sidekick Hawk provide security for the congresswoman while Spenser does the sleuthing to sniff out and neutralize the credible threats. Predictably, considering who Spenser is protecting, the baddies turn out to be a white supremacist group called “The Minutemen,” run by a guy named Bishop Graves.

The action heats up when the FBI gets involved and the Boston special agent in charge, Bobby Nguyen, tries to force Spenser off the case. But despite the uncooperative congresswoman and interference from Nguyen, the intrepid Spenser perseveres. He painstakingly identifies the key players threatening Garcia-Ramirez and puts into motion his own plan to neutralize the threats.

Bye Bye Baby is classic Spenser. With Hawk watching his back, Spenser gets into the usual number of violent confrontations on the way to achieving justice and upholding his personal code of honor. Love interest Susan Silverman lends support with her psychiatric insight. Once again, Ace Atkins captures the essence of the Spenser novels, complete with beloved characters like Susan, Hawk, Belson, Quirk, and Pearl, the wonder dog (version 3.0). Zebulon Sixkill even makes an appearance.

Despite the passing of his creator, I’ve appreciated that Spenser and his world have remained for the past ten years. As he has done with the previous nine books, Atkins does a great job here providing an imaginative plot while retaining the characters and relationships that keep these novels familiar, comforting, and enjoyable to read. And we all need something dependable to rely on in this crazy, polarized, and pandemic plagued world.

The biggest difference I’ve noticed in the last couple of Spenser books I’ve read is that Adkins has leaped forward in time and Spenser is now in the 21st century where the internet now exists and mobile phones have replaced pay phones and the like.

Most of Parker’s books, including those written in the 1990s and 2000s, were set firmly in the seventies and eighties. That has allowed me to continue choosing to ignore the fact that Spenser, a Korean War veteran, has aged little since he first appeared in 1973. I prefer to think of him as a sporty 40-year-old. But moving the Boston P. I. into the 21st century and drawing attention to it by referring to current events makes it increasingly difficult to indulge this suspension of belief. I could be wrong, but maybe Atkins feels he has stretched credibility for the character as far as it will go and that’s part of the reason he is retiring from the series. This makes me wonder if this is finally the end of Spenser, which makes me aware I’m still not ready to give him up.

As in previous installments in the series, the story line and characterizations offer more of the same with few surprises, but Bye Bye Baby is classic Spenser, and an enjoyable read for fans of the series.

Penguin Random House publishes Bye Bye Baby by Ace Atkins from January 18, 2022. I received an advance copy of the book from the publisher via Net Galley used for this review, representing my honest opinions.