The Killing Kind by Jane Casey—essential reading for every psychological thriller fan who enjoys a dark story where the tension builds to almost unbearable levels. 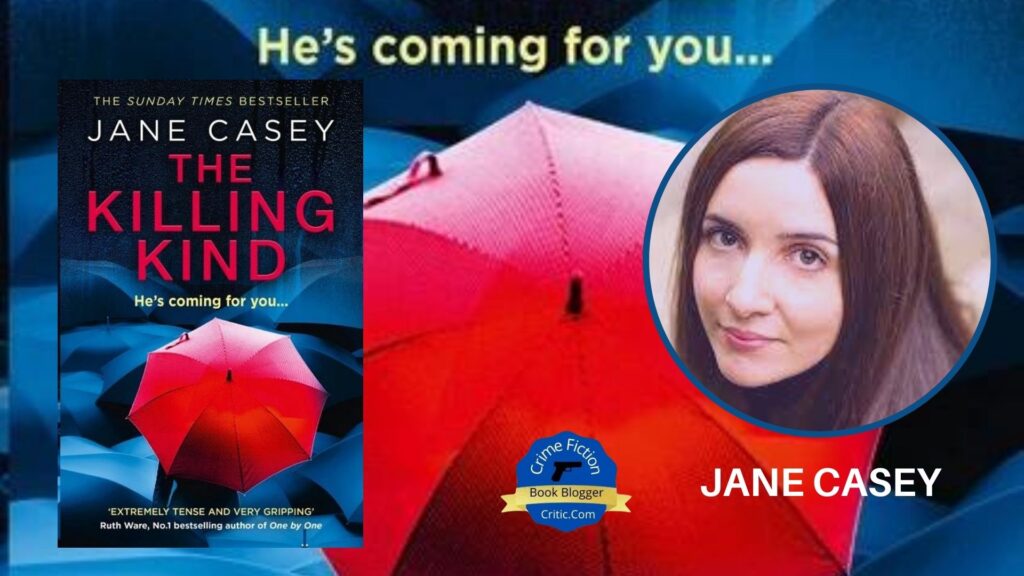 “He tells you you’re special…

As a barrister, Ingrid Lewis is used to dealing with tricky clients, but no one has ever come close to John Webster. After Ingrid defended Webster against a stalking charge, he then turned on her – following her, ruining her relationship, even destroying her home.

He tells you he wants to protect you…

Now, Ingrid believes she has finally escaped his clutches. But when one of her colleagues is run down on a busy London road, Ingrid is sure she was the intended victim. And then Webster shows up at her door…

But can you believe him?

Webster claims Ingrid is in danger – and that only he can protect her. Stalker or saviour? Murderer or protector? The clock is ticking for Ingrid to decide. Because the killer is ready to strike again.”

Like many good thriller, The Killing Kind by Jane Casey opens with a suspicious death. We just aren’t certain at the start whether the death is a horrific accident or a murder.

In the first chapter, we met the central character, Ingrid Lewis, a London barrister. Lewis is a tenacious lawyer who is good at her profession, and she likes to win. When she arrives at court, she runs into a fellow barrister, Belinda Grey, a more senior lawyer Lewis once seconded on a rape trial. Grey is on her way out following a brief hearing. After a brief catch-up, when Lewis learns Grey arrived without her umbrella, she insists that Grey take hers since it’s pouring rain outside. Lewis believes the rain will end before she finishes her hearing. Grey agrees, takes the umbrella, and departs. Following the hearing, Lewis is horrified to learn that Grey died in an auto-pedestrian accident on the way back to the office. Fearing that the umbrella may have blocked Grey’s vision, causing her to step off the curb of a busy street in front of the truck that struck her, Lewis feels unsettlingly responsible for her colleague’s death.

The novel then dips two years into the past—via Lewis’ memories of another past court case where she defended a man named John Webster on stalking charges. After Lewis destroys the female victim on the stand, the court acquits Webster. While he beats that rap, thanks to Lewis, it’s clear from the trial testimony that Webster is an evil sociopath. Almost predictably, after the trial, Webster turns his obsessive tendencies on Lewis and starts stalking and harassing her.

As the story continues, we learn from Lewis’ perspective how Webster’s terrorizing activities come close to destroying her life completely and leave her living in abject fear, clinging to her sanity by a thread. Perhaps the worst part of it is that Webster is so skilled at covering his tracks that even the police don’t fully believe Lewis, which adds to her anguish. Frankly, as the months transform into years, there is a point where even the reader starts to doubt her sanity to the point that Lewis becomes almost an unreliable narrator.

While the novel is gripping from the jump, Jane Casey effectively lulls the reader into a false sense of security with the initial chapters, but when she punches the gas pedal, the suspense and tension accelerate from zero to sixty in an instant. As we await potentially fatal outcomes, some of humanity’s most powerful emotions play out on the page.

To describe The Killing Kind using standard clichés like “nail-biter” or “edge of your seat” would be a disservice to the book. Those terms wouldn’t even begin to adequately describe the trepidation, tension, and sense of foreboding this novel generates for the reader. Jane Casey is an artist who expertly employs tension as her medium. We become her canvas. I recall few thrillers I’ve read in the past that accomplished this so effectively. I had to read the book in two sittings, not because it failed to hold my attention, far from it. It’s wickedly good. I simply had to take a break from reading.

Halfway through the book, I developed what I’m sure was a tension-related headache on the first day. I rarely ever get headaches for any reason, which should tell you much about this endlessly tense novel. Only the novels of Norwegian writer Jo Nesbø have ever affected me this way.

All I have to say after reading The Killing Kind is, Jane Casey, where have you been all my life? I can’t imagine how difficult it will be to find another thriller to read this year that will even come close to the gut punch this book delivers. But now that I’ve discovered this Irish -born author, I’ve happily learned she has many other novels I’ve yet to read. The Killing Kind by Jane Casey is essential reading for every psychological thriller fan who enjoys a dark tale where the tension builds to almost unbearable levels.

The Killing Kind by Jane Casey (Harper Collins Publisher) goes on sale September 21, 2021. It’s not to be missed by fans of the genre.

The publisher provided me an advance reader copy of the book for this review, representing my honest, unbiased opinions.