Snare by Lilja Sigurðardóttir—Classic Sigurðardóttir, a pleasure read for her fans, and not a bad place to start if you’re new to her. 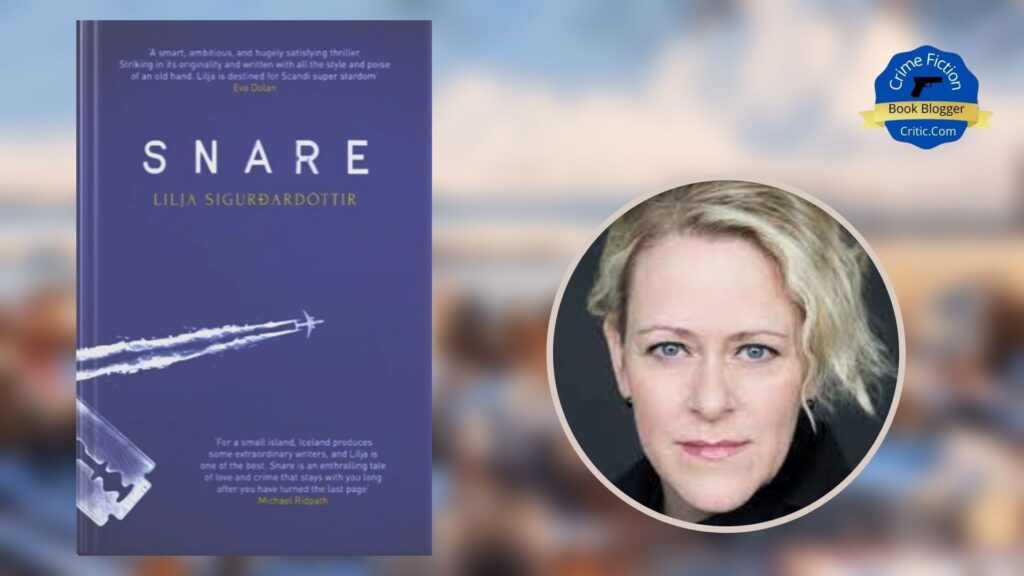 Translated from Icelandic by Quentin Bates

Published in English by Orenda Books

After a messy divorce, young mother Sonia is struggling to provide for herself and keep custody of her son. With her back to the wall, she resorts to smuggling cocaine into Iceland, and finds herself caught up in a ruthless criminal world.

As she desperately looks for a way out of trouble, she must pit her wits against her nemesis, Bragi, a customs officer, whose years of experience frustrate her new and evermore daring strategies. Things become even more complicated when Sonia embarks on a relationship with a woman, Agla. Once a high-level bank executive, Agla is currently being prosecuted in the aftermath of the Icelandic financial crash.

Set in a Reykjavík still covered in the dust of the Eyjafjallajökull volcanic eruption, and with a dark, fast-paced and chilling plot and intriguing characters, Snare is an outstandingly original and sexy Nordic crime thriller, from one of the most exciting new names in crime fiction.

Ordinarily, in the interest of variety, I don’t read and review two books in a row by the same author. However, here I make the rare exception. Icelandic author Lilja Sigurðardóttir is the newest among my favorite crime writers. After devouring her most recent (and absolutely brilliant) release, Cold As Hell, I simply couldn’t wait for more Sigurðardóttir. Snare had been on my TBR pile for a while, so I tucked in to it straight away.

After being caught out in a sexual affair with another woman, our protagonist, Sonja Gunnarsdóttir, is in dire straits. Because she has no ready prospects for supporting herself, her enraged husband Adam sues for custody of their nine-year-old son, Tómas.

Out of the blue, Thorgeir, an attorney who studied law with Adam, calls expressing sympathy over the bitter divorce proceedings Sonja faces. He generously offers legal help. Desperate and without thinking twice, Sonja places her fate in his hands. But, not only does she get the wrong end of the stick in the divorce proceedings—losing custody of her son, Thorgeir turns out involved in the drug trafficking. He pressures Sonja to become a drug mule to pay her legal fees and child support. Lacking other options, she agrees and regularly risks prison running the gauntlet of Iceland’s Directorate of Customs while smuggling copious amounts of cocaine into Iceland from other European countries. While Sonja dreams of escaping Thorgeir’s clutches and getting her son back, the truth is, she is snared.

Although quite a different novel from Cold As Hell, Sigurðardóttir again offers us a likable but flawed female lead and then bounces her off several strong personalities that bring out her best and sometimes her worst. These others include her ex-husband Adam, Thorgeir, Thorgeir’s cruel enforcer Ríkharður, and to an extent, her lover Agla. But, I very much liked Sonja’s character development arc, which complements the unfolding story.

Also, as in Cold As Hell, Sigurðardóttir again masterfully uses multiple points of view and the inner thoughts of several key players to create layered, fully developed characters. We don’t necessarily like or emphasize with them all, yet we can’t help connecting with them and caring about what happens to them, whether for better or worse. In Sonja’s case, we’re taken aback by her drug smuggling, but naturally feel sympathetic toward her and hope she isn’t caught. Also, I couldn’t help admire the clever ways she invented to escape the detection of the customs officials. The author uses that empathy to steadily ratchet up the tension, which builds and builds relentlessly each time Sonja returns to Iceland with a load of cocaine.

Not only a novelist, Sigurðardóttir is also a screenwriter, which I think goes a good way toward explaining how skillfully she breathes life into her characters. In novels, characters are mostly revealed through description and internal monologue, whereas screenwriters develop their characters primarily through action and dialogue. Sigurðardóttir uses this screenwriting technique to excellent effect in her novels. We get the descriptions and inner thoughts of the characters, but their actions and dialogue add additional layers to our understanding of them. That makes them seem incredibly real.

While I really liked Sonja’s character development, and her interactions with those around her were a major strength of this novel, my favorite character in the book was Bragi, a sixty-nine-year-old customs officer, who is the subject of one of the novel’s fascinating subplots. Despite his age and that the directorate is pressuring him to retire, Bragi is an intelligent and seasoned officer who works out that Sonja is a big-time smuggler. Once we learn this, the tension grows to epic proportions as Bragi becomes her chief nemesis.

Here again, Bragi is a character who we quickly start caring about. We discover his elderly wife, in the advanced stages of Alzheimer’s disease, is institutionalized in a care home where she is mistreated. His wife’s condition sucks the very life out of him, yet he balances caring for his wife with doing his duty, both to the best of his abilities.

The novel is set in a ReykjavÍk still covered in the dust of the 2010 EyjafjallajÖkull volcanic eruption. This, along with the frequent mention of the cold and ice of Iceland, compliments the dark, chilling plot to provide us an authentic Nordic noir experience. Once again, Lilja Sigurðardóttir delivers a brilliantly plotted thriller with suspense that feels palatable. While a translated novel can sometimes feel a bit a off, this one was translated from Icelandic by the incomparable Quentin Bates. As a result, it feels smooth as silk.

Snare is certainly a gripping read, and Lilja tosses in a couple of twists near the end that totally blindsided me but delighted me at the same time. The book also offers some commentary on popular culture today, which is certainly worth the discourse. Snare is classic Sigurðardóttir, a pleasure read for her fans, and not a bad place to start if you’re new to her.

Snare by Lilja Sigurðardóttir is published in English by Orenda Books and is available in electronic and print versions. I purchased the copy of the book used for this review representing my honest, unbiased opinions.