Retribution by Robert McCaw, a taut, gritty, and pacey read touching on the themes of community, covetous, greed, and revenge. 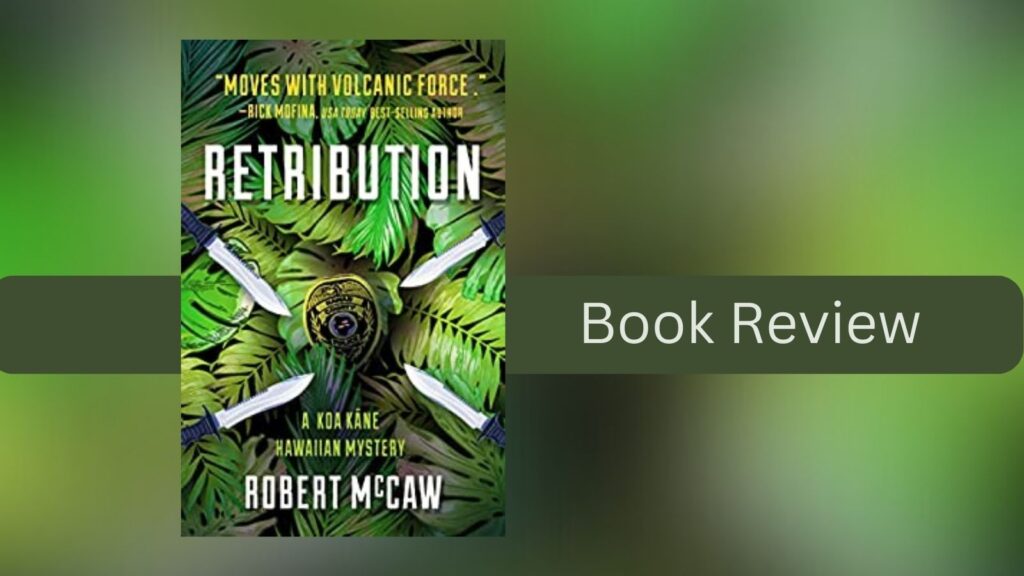 As people around him come under attack, Chief Detective Koa Kane wonders if he might be the real target.

In the back alley of a bar on Hawaii Island, a young man is found stabbed to death. When Hilo Chief Detective Koa Kane begins investigating the crime, the murder weapon is recovered only a few feet away from the body. Crime scene technicians find fingerprints on the knife — they are a perfect match for Koa’ s younger brother, Ikaika.

As the brothers scramble to prove Ikaika’ s innocence, another crime sends shockwaves through the Hilo police force. A sniper tries to take out Makanui, Koa’ s closest colleague. As Koa tries to figure out whether these crimes are linked, the sinister force continues their killing spree, threatening Koa and his loved ones at every turn.

Could Koa be the real target? If so, who is behind this trail of retribution? With his own secret criminal past, Koa confronts an all-out offensive against those closest to him and his police force to which he has devoted his life. As the bodies pile up, Koa finds himself the ultimate target of a ruthless adversary and must risk it all to survive.

In Robert McCaw’s propulsive novel Retribution, a Hilo (Hawaii) detective struggles to discover the truth when someone frames his brother for murder and how it might connect with a series of attacks aimed at those closest to him.

Set in the environs of Hilo on the Big Island of Hawaii, McCaw’s prose features beautiful, detailed descriptions of people and picturesque places that give the book an atmospheric feel. The taut, suspenseful, and intricate plot makes the book difficult to put down. I read it from beginning to end in a single sitting.

We meet Chief Detective Koa Kane of the Hawaii County police, whose past intersects with his present in unexpected ways. When Koa investigates a murder that occurred in the alley behind a seedy dive bar, it shocks him to learn that a damning piece of evidence found at the scene points to his brother Ikaika as the killer. Although the chief of police then removes Koa from the case, convinced of his brother’s innocence, he continues investigating unofficially. Then, a sniper shoots Koa’s colleague and friend, Detective Makanui Kauhane, as she leaves her house for work. Suddenly, it seems someone is attacking Koa’s family and closest friends and colleagues. The series of violent attacks seem more of a criminal conspiracy than coincidental. With the help of his team, the county prosecutor, and a local criminal defense attorney, Koa develops and uses small clues that guide him through the quagmire of his tragic past while leading him to answers about who is behind the complex conspiracy.

Thematically, Retribution explores community, covetous, greed, and revenge. McCaw offers a clever foreshadowing in the opening chapters, and a suspect pool large enough to keep the reader guessing about the mystery parts of the book. Along with a scintillating story line, McCaw’s prose portrays respect for the cultural traditions of Indigenous Hawaiians, although this does at times feel a tad too didactic in its messaging. And that leads me to my only small gripe about the book, some of the dialogue.

McCaw’s incorporates his mastery of Hawaiian slang and dialect in dialogue to the extent it runs right into the overkill zone. Authors often incorporate dialect, slang, or purposely misspelled words to reflect a character’s accent. This falls under the general heading of characterization, and authors sometimes use the form of a character’s speech to signal aspects of who that character is. But as with so many techniques in fiction, moderation is vital in using dialect and slang, even when meant to elevate or explain a culture. Although I suspect this was done not only to add realism, but to show respect for Indigenous Hawaiians, it seems excessive here. Hawaiian is a Polynesian language of the Austronesian language family that takes its name from Hawaii, the largest island in the tropical North Pacific archipelago where it developed. Hawaiian language is one of the two official languages of the state of Hawaii. But according to the recent census, out of the 1.46 million (2020), only about 18,000 Hawaiians speak the language. Having spent much time in Hawaii, I can say with confidence most visitors to the archipelago come away with mastery of exactly two Hawaiian words, Aloha and Mahalo. So, the extensive use of the Hawaii language itself, along with a good amount of Hawaiian Pidgin, along with the translations of it all, became a distraction and didn’t make the story feel more realistic. As it’s said, it’s hard to go wrong with moderation. When in doubt, always avoid overkill.

Otherwise, Retribution is a taut, gritty, and pacey read that I very much enjoyed. I recommend the book for readers of crime, mystery, and thrillers, as the book touches all these categories.

Many thanks to the publicist and Oceanview Publishing for providing me an advance review copy of the book via NetGalley in exchange for my honest review.

Get Your Copy of Retribution on