The File by Gary Born, a captivating, fast-moving novel with a carousel of intriguing characters, that will satisfy the most discriminating action thriller junkies. Read my full review. 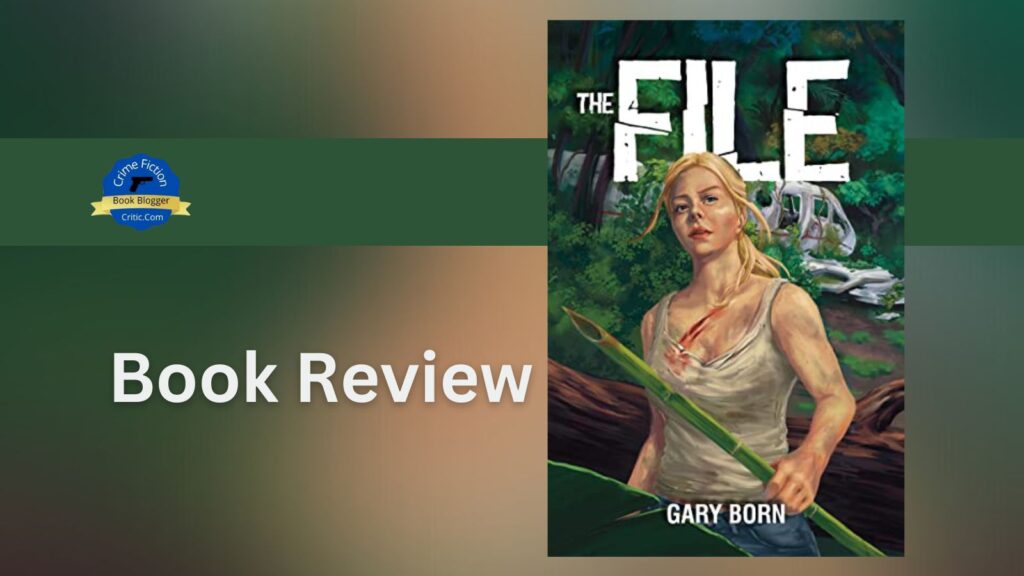 Sara West is a beautiful 28 year old graduate student on a scientific expedition in Africa; who stumbles upon a cache of WWII Nazi files in the wreck of a German bomber hidden in the jungle. The files reveal the location of a multi-billion dollar war-chest, secretly deposited by the Nazis in numbered Swiss bank accounts at the end of WWII. The story that follows is a nail-biting thriller, with a captivating heroine who is pursued across Africa, the Middle East and Europe by relentless Russian and American hitmen.

While the genre, action thrillers, is something I selectively read, I rarely review novels like The File by Gary Born here, a website devoted to crime fiction. But recently, a generous publicist offered me the book as part of a two-book deal, so I accepted it along with the offered traditional crime novel. Imagine my surprise when this novel blew me away. I think The File is the best action thriller I’ve read since Robert Ludlum’s original Bourne series, and that’s no exaggeration. The quality of this book compelled me to include a review here, even though it doesn’t strictly fit with the theme of the site. This novel has it all ― spies, exotic locales, fights, shootouts, car chases, foot chases, explosions, fast flying helicopters ― you name it.

Sara West, a twenty-eight-year-old graduate student, is on an expedition in Uganda with her renowned Harvard botanist father, her fiancé, and a team of scientists. One of the expedition’s local guides reports finding “a machine” in the jungle atop a ridge near the camp. Curious, Sara accompanies the guide to investigate and discovers a crashed unmarked WWII aircraft. After entering the plane, West finds six corpses dressed in German military uniforms and a steel cabinet filled with ancient documents. The documents, emblazoned with Nazi symbols, pertain to the Third Reich, and many bear the signature of Adolf Hitler. West collects some of the more interesting looking documents and returns to the camp where she tells her father what she discovered. In his routine evening status report email to the universities sponsoring the expedition, her father appends a note telling of his daughter’s discovery. And then, unbeknownst to the scientists in the wilds of the Ugandan jungle, all hell is about to break out.

Both Russian and American intelligence agencies intercept the email containing the disclosure of the discovery of the aircraft and documents, and two powerful men immediately understand what Sara West discovered. One man, former KGB and FSS member Ivan Petronov, wants the documents because he knows they are the key to accessing tens, perhaps hundreds of billions of dollar that Hitler and his Nazi minions stashed in Swiss bank accounts before the fall of the Third Reich. Greed motivates his interest in seizing the documents. CIA Deputy Director Franklin Kerrington III wants to lay his hands on the documents for another reason. He fears the documents may reveal his family’s collusion with the Nazis during World War II, which would destroy his family name and fortune. Both Petronov and Kerrington dispatch mercenaries to Africa to locate the scientists and to seize the priceless documents.

The Russians arrive first and massacre everyone in the camp except Sara West who had returned to the crash site. Watching through binoculars the horrific murders of her father, fiancé, and the other members of the expedition, Sara flees into the jungle with the documents and with the Russian mercenaries in hot pursuit. Because West had accompanied her father on many expeditions to Africa, she is at home in the jungle, which represents her only advantage and hope for survival. She makes her way to the nearest town across the border in the Congo before the Russians catch up. But moments before they capture her, Kerrington’s American mercenaries arrive in the town. Unfortunately for West, with the same mission ― to kill West and seize the documents. The Russians and Americans engage in a firefight and the Americans prevail. But when one of the Americans, former CIA officer turned soldier of fortune Jeb Fisher, grabs Sara and learns about the content of the file, he goes rogue and becomes her ally. After killing members of his own team, Fisher and West flee Africa for Europe. They plan to expose the existence of the Nazi treasure and a list of Nazi collaborators from the file, many of whom are still key Western political and intelligence figures. But Sara West feels conflicted. Is Jeb Fisher a man she can trust, or is he only after the Nazi treasure like the rest?

The file features a carousel of intriguing, fully rendered characters. The sheer number of people we must keep track of seems daunting, but the author helpfully titles each chapter with the name of the character most prominent in the chapters as the plot plays out. That makes it far easier to avoid getting lost in what is a very intricate and creative plot. Born’s prose is satisfyingly descriptive, and his writing is of literary caliber. He grips the reader’s attention with the first chapter and sustains the tension and suspense throughout. If you enjoyed Ludlum’s Bourne series, this is a book for you. Born veers slightly into the fantastique, particularly toward the novel’s end, but all in all, he offers a very plausible story line that makes for an action-packed, absorbing, and entertaining read. Without giving too much away, the demise of one character in the book felt slightly disappointing because I feel the character could have become a franchise making character in a series. But even as a standalone, this novel begs for a film adaptation. Due out in March 2023, I recommend preordering this one so you don’t forget to grab a copy.

Gary Born is a renowned international lawyer and author. He has represented countries and businesses in nearly 1,000 international disputes around the world, including cases involving Sudan, Eritrea, Ethiopia, and Yemen. Mr. Born has also published widely on international law, including the leading commentaries on international arbitration and litigation. He has taught at universities in the Americas, Europe, Asia, and Africa, including Harvard Law School, National University of Singapore, and St. Gallen University. He lives in London, with two Maine Coons, and travels widely. The File is his first novel.

Get Your Copy of The File on