The Commandments by Óskar Guðmundsson—smartly plotted and satisfyingly suspenseful series starter that will leave you waiting impatiently for the next book.

Guðmundsson’s brilliantly plotted and satisfyingly suspenseful first book in a series featuring Detective Inspector Salka Steinsdóttir, a strong female protagonist, shows unmistakably that he well deserves a compliment recently received from one of the top bestselling Icelandic authors of crime fiction. Ragnar Jónasson called Guðmundsson “one of the leading new talents of Icelandic crime fiction.” I agree. The Commandments, first published under the title Boðorðin in Icelandic by Bjartur, is Guðmundsson’s debut English translation. I can’t wait for more translations of his books. Having read the novels of many of the best Icelandic crime fiction authors in recent years, I’ll open this review with my opinion that The Commandments is as good as Icelandic crime writing gets. 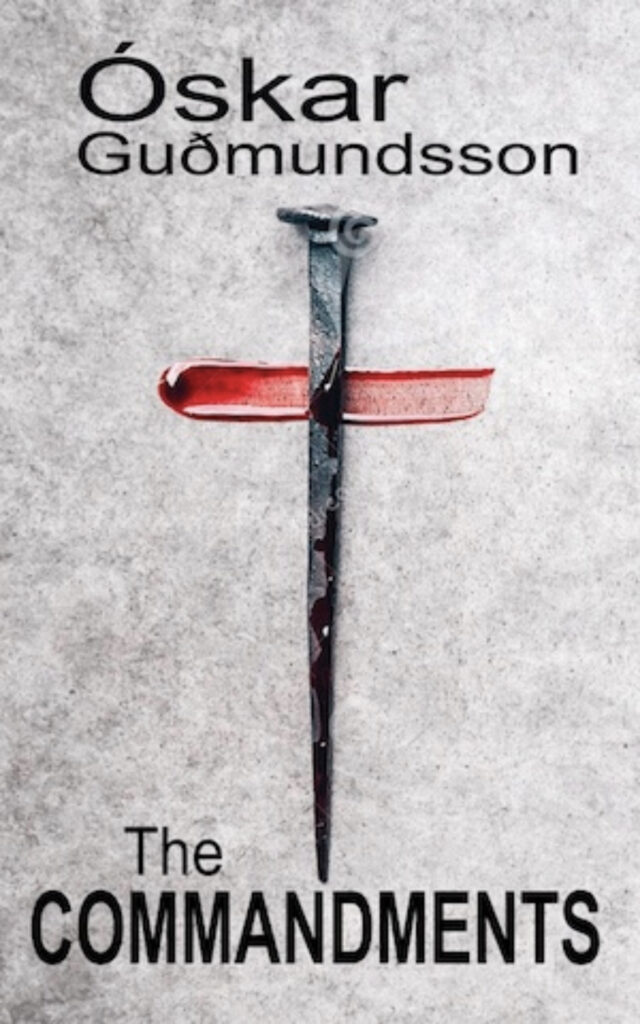 Former detective Salka Steinsdóttir finds herself unwillingly pitched into the toughest investigation of her life, just as she returns to the tranquil north of Iceland to recover from a personal trauma.

The victim is someone she had pursued earlier in her career – and had never been able to pin down. Now a killer has taken the law into their own hands and meted out brutal retribution for ancient crimes.

Salka is faced with tracking down the murderer of a stalwart of the church and the community, a man whose reputation stretches deep into the past, and even into the police team tasked with solving the case.

As the killer prepares to strike again, Salka and her team search for the band of old friends who could be either killers or victims – or both.

A bestseller in Iceland, The Commandments asks many challenging questions as it takes on some highly controversial issues.

The distinctive cover of The Commandments suggests that there is a religious theme to the book. It features a cross, the most recognized icon of Christianity. A blood smear forms its transverse bar, and a corroded Roman-era iron nail its upright post. That immediately put me in mind of crucifixion, the method of capital punishment used by the Romans and others in which they nailed the convicted person to a large wooden beam affixed to a post and left them to hang until their eventual death from exhaustion and asphyxiation. Combined with the cross, the title called to mind the Ten Commandments given by God to Moses. So, before I’d opened the book, I assumed there was a religious theme to the book and that perhaps someone had broken the fifth commandment, “You shall not kill.” That assumption proved correct as I started reading, but I soon learned that the fifth commandment wasn’t the only commandment someone broke.

Salka Steinsdóttir is a former police detective and most recently a former civilian crime analyst with the Metropolitan Police CID team in London after she and her husband Eysteinn moved to Britain from Iceland some years previously. We meet Salka after she has returned to Iceland, on hiatus while sorting some difficult marital problems. But when someone brutally murders a local priest in Akureyri, her hometown, members of the short-staffed Akureyri police recruit her to help with the investigation. At first, Salka refuses. Besides her marital problems, she is also back in Iceland because she’s concerned about her aging father, who is in failing health. She isn’t even sure she intends to return to police work after the break. But once she learns the victim is the priest she once investigated for sexual abuse, the murder piques her interest. She agrees to take a look at the crime scene at least and to offer her opinions.

Something I found interesting is we don’t meet Salka, the novel’s main character, until the fifth chapter. That’s unusual since the usually accepted convention is that authors should introduce the main character in the first chapter of a novel, if not the very first page. Some books open with a preliminary first chapter that sets the scene or tone of what’s to come before the main character enters. But I can’t recall ever reading the first four chapters of a novel before the protagonist appears. Yet, the story doesn’t suffer as a result. That’s because Guðmundsson cleverly and effectively used those early chapters to quickly build momentum and suspense by teasing out bits of information to the reader that he then uses to plant questions in our minds that we want to be answered. That keeps us turning the pages.

Despite her earlier reluctance, Salka ends up taking charge of the murder investigation, which candidly came as no surprise. She starts gathering pieces of the puzzle and works out the probably why behind the murder, well before she identifies the who—the murderer. Guðmundsson offers up enough believable suspects to keep us guessing right along with Salka until almost the very end.

Beyond the murder investigation, Salka muses about the dwindling prospects that her marriage will survive the difficulties even though a part of her wants things to work out. Also, she’s distracted by her father’s failing health and a casual romance that entwines her. The book is full of interesting, well-drawn characters. Still, Guðmundsson devotes most of his attention to Salka, revealing a complex, multi-layered—somewhat flawed but fascinating protagonist.

This ambitious Icelandic crime tale will resonate with readers who enjoy fast-paced, suspenseful thrillers that double as legitimate whodunits with a strong female main character who can take care of herself. There is a truly mind-blowing twist at the end, which I never saw coming, something I always enjoy. The Commandments is among the best Icelandic crime novels I’ve read this year, perhaps ever, and I’ve read many excellent ones. Translator Quentin Bates does his usual extraordinary job delivering an outstanding English translation that reads as smooth as glass. Fans of the genre won’t want to pass this one up. It’s that’s good.

Corylus Books Ltd published The Commandments on October 12, 2021. I received an advance reading copy of the book from the publisher used for this review, representing my honest and unbiased opinions. 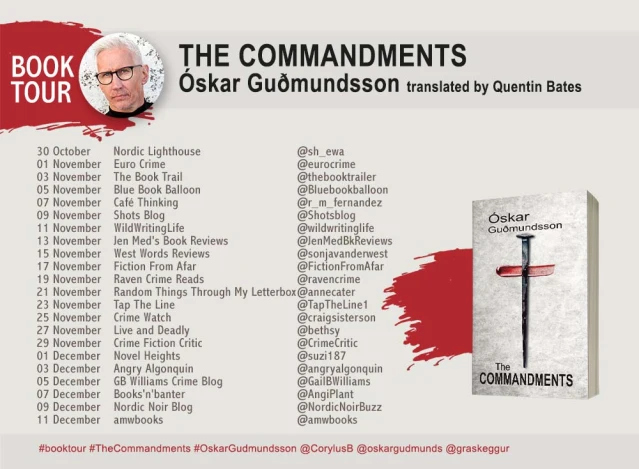