Rupture by Ragnar Jónasson is a solid, engrossing mystery & detective read from the reigning master of Scandinavian crime fiction.

Rupture is the third book in Ragnar Jónasson’s Dark Iceland series. Because the series has been translated into English years after the novels were published in Icelandic, there is some confusion about the proper reading order for these books. Adding to the confusion is the fact that two different publishers, Minotaur Books, an imprint of St. Martin’s Press and Orenda Books published English translations.

Like many series, evolution of the major characters and past events dictate the reader read the Dark Iceland series in a specific order to avoid confusion. Don’t go by the book series orders given by book retailers like Amazon, which are incorrect. At the end of this post I have provided the proper reading order that will save readers much confusion. 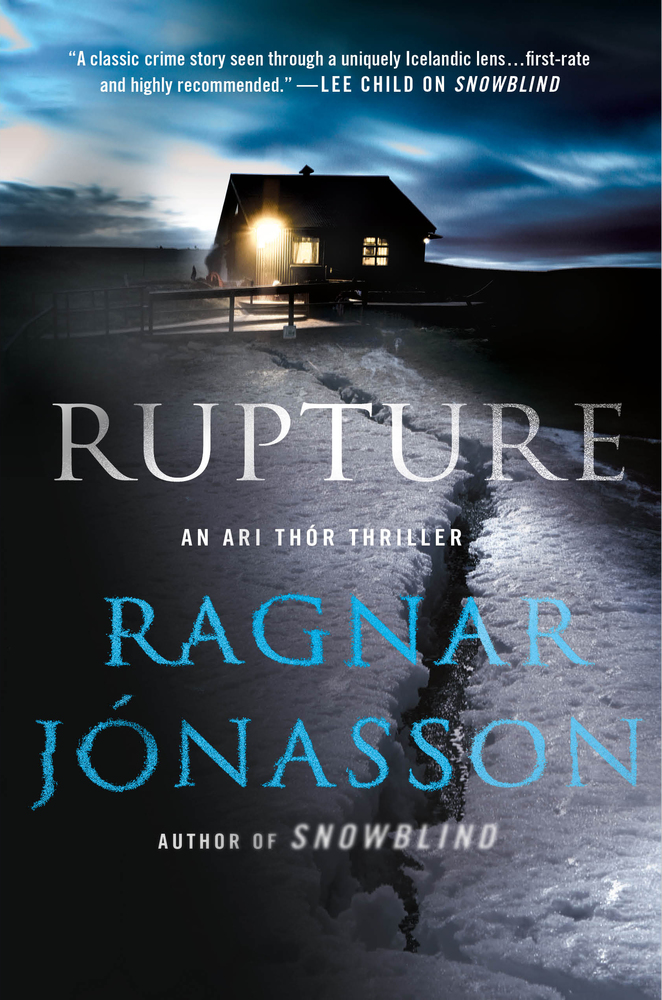 When new evidence for a fifty-year-old murder surfaces, young policeman Ari Thór reopens the case and begins his investigation. Piecing together what happened that fateful night proves difficult in a town where no one wants to know the truth, where secrets are a way of life. He’s assisted by Ísrún, a news reporter in Reykjavik who is investigating an increasingly chilling case of her own. Things take a sinister turn when a child goes missing in broad daylight. With a stalker on the loose, and the town in quarantine, the past might just come back to haunt them.

Rupture takes place in winter, following the events of Blackout, the second book in the Dark Iceland series. When the story opens, authorities have locked down the town of Siglufjörður because a virulent virus is on the loose. While that sounds very familiar to contemporary readers, the virus isn’t COVID-19, but haemorrhagic fever.

A wealthy adventurer from France who had flown from Africa to Iceland unknowingly brought the virus with him. Once his condition worsened and the man died, a specialist in infectious diseases confirms he died from the highly contagious disease. With no other practical way of dealing with the disease, the National Defence Authority placed the town under quarantine. Gripped by panic, stoked by the extensive media coverage, the townspeople feel understandably terrified and everyone remains in their homes waiting for the threat to pass.

To pass the time while little else is going on in Siglufjörður, Ari Thór Arason, the protagonist, entertains the request of a local man named Hédinn who asks Ari Thór to look into the fifty-year-old death of an aunt when she was only a young woman living in a nearby abandoned settlement called Hédinsfjörður. Hédinn was a small child at the time. Now sixty, the man requests Ari Thór to review the case because he feels uncertain the woman’s untimely death was an accident or a suicide as officials ruled it was at the time it happened.

While Ari Thór pieces together what facts he can dig up on the case, Ísrún, the Reykjavik journo who first appeared in Blackout, makes an encore appearance. Ari Thór gets her to help with his suspicious death investigation, but Ísrún is also pursuing a disturbing case of her own in Reykjavik that involves murder.

None of the structural problems you might expect from putting two unrelated cases together in the same novel, like tying up increasingly low-impact loose ends, occurs in Rupture. That’s primarily the case because Ari Thór and Ísrún work their investigations independently of each other. Jónasson switches back and forth between the perspectives of the two characters and their investigations.

I enjoyed the growth of Ari Thór, that’s clear since first meeting him in the first novel of the series. No longer a rookie police officer unsure of himself, Ari Thór has developed into a capable investigator. Also, I was pleased with the return of Ísrún, my favorite character from the previous novel. We get to know her even better in this one. Another thing I liked about this book was that Ari Thór makes progress with restoring his relationship with his former partner Kristin when it had seemed the relationship had all but ended forever.

While the sense of foreboding and suspense I expect from Jónasson is mostly absent in Ari Thór’s investigation this time around since it’s an ancient cold case with no real high stakes, there is plenty of that to go around in Ísrún’s case. It’s more than enough to carry the novel and keep the reader engaged. And despite what Ari Thór’s investigation lacks in tension and danger, it’s still interesting to see how he puts together the facts to work out the truth of a secret buried for half a century.

While unspectacular, Rupture is still a solid, engrossing read from the reigning master of Scandinavian crime fiction. Dedicated Nordic noir fans will enjoy it, and there are plenty of clues in both investigations to please armchair sleuths who love to match wits with the detectives.

I purchased the hardcover copy of the book used for this review.

For the benefit of those who might be interested in reading this series, ignore the book series order given on Amazon and the sites of other book retailers. Here is the proper reading order of the English translations of these novels.