Home » Book Review: For Reasons of Their Own by Chris Stuart

For Reasons of Their Own by Chris Stuart—A formidable display of stunningly written scenes that cohere into a fully satisfying narrative. 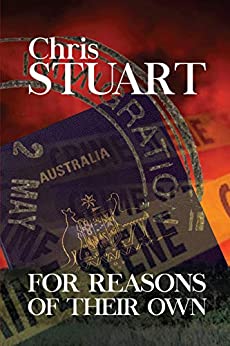 For Reasons of Their Own

For the past several years, I’ve read all the novels from the shortlist for the Ngaio Marsh Awards, literary awards presented annually in New Zealand. But this year, several things conspired to prevent me from doing so. Still, I was determined to at least read the books picked as the best novel and best first novel. So, that’s how I came to pick up of a copy of For Reasons of Their Own by Chris Stuart, the Ngaio Marsh Awards 2021, recipient for best first novel.

Stuart was quick to lure me in and before I knew it, I was hooked. She offers a strong female lead—both likeable and complex—but a woman at a tough place in her life for several reasons.

Can the past ever be left behind? Ask a flawed detective, a former refugee and a government desperate to misuse a dead body to reshape Australia’s security policy.

Melbourne is a city on the brink, from arson fed bush fires, searing heatwaves and the potential threat of terrorism.  Detective Inspector Robbie Gray, falling foul of Police bureaucracy, gets called to a body found lying in a rural swamp. When the nationality of the victim is revealed, ASIO take over her investigation and she is sidelined. Convinced they are misinterpreting the evidence, along with a disenfranchised Aboriginal policeman, she secretly digs for the truth and discovers an entirely different motive, one which transcends international borders and exposes corruption in the humanitarian world.  When the killer is arrested, DI Robbie Gray realises that the past contains only hurt and pain and she asks herself whether in certain circumstances, murder may well be justified.

“For Reasons of their Own,”  is aimed at international readers who love the psychology of crime, who prefer to empathise with a strong female protagonist, who want to learn and understand something quite different about the humanitarian world and who look forward to the next book in the planned series.

For Reasons of Their Own is a bleak chronicle of implacable fate, revenge, and murder set in 2014 in and around Melbourne, Australia, where a tired and frustrated Robbie Gray, a Victoria detective inspector, broods over the assignment her boss (Ted Hobbs) has given her, to attend undercover a week-long International Disaster Conference commemorating the tenth anniversary of the 2004 Indian Ocean earthquake and tsunami.

Partly, Gray’s assignment stems from concerns by the Australian federal government over the high number of Muslim conference attendees, considering rising tensions from Islamic fundamentalism in neighboring countries. The government wants an experienced police officer monitoring the conference and participants on the lookout for anyone using the conference as cover for entering the country to commit a terrorist act. But Gray knows the real reason Hobbs has tapped her for the assignment.

During a recent murder investigation Gray’s team had conducted, a large quantity of cocaine went missing. While an internal police enquiry exonerated Gray and her team, a cloud of suspicion still hovers over them all. So, Gray acknowledges the true reason for the conference assignment is that her superiors have lost confidence in her because of the missing narcotics, which she considers a professional slap in the face.

From the international disaster conference, the focus shifts to the discovery of an unidentified body in a wetlands area of the rural community of Acacia Glen near Palmerston. Almost by happenstance, DI Gray gets the case when it becomes apparent the someone murdered the victim. In time, the police identify the victim as Dr. Hasam Alamri, a Jakarta-based UN official and one of the Muslims who had been in Australia for the disaster conference. Painstakingly, Gray and her understaffed team of investigators piece together facts they hope will lead to Alamri’s murderer. The case is rife with complexities from the start. But things become truly convulsed when the Australian federal police and intelligence services establish a tenuous link between Alamri and a terrorist plot. They pull the rug out from under Gray and take over the case. But she can’t let it go.

After gaining the approval of her obstinately uncooperative and politically sensitive boss Hobbs, she doggedly pursues a parallel investigation. The intrepid Robbie Gray, however flawed and troubled, is perhaps the most fully human and sympathetic character I’ve encountered in a novel this year. Stuart’s artful fusion of a murder investigation with the multi-layered obstacles Gray must overcome to solve it—including exorcising her own personal demons—is accomplished using vivid imagery and a formidable display of stunningly written scenes that cohere into a fully satisfying narrative that confers horrific intensity on the escalating chaos, while precisely dramatizing the sense of issues that stalk and punish Stuart’s characters.

This is a strangely beguiling book. On one level, it’s the story of a complex murder investigation. On another, it’s about a strong woman’s faith being tested in a myriad of ways. The closure we’re offered at the end isn’t as complete as I would have liked, nonetheless, this is magnificent writing. And, perhaps it’s not the sort of story where every thread should be wrapped up tidily in a bow.

I’ve read some truly exceptional crime fiction books in 2021, but For Reasons of Their Own is easily my favorite of the year. Anyone who enjoys reading excellent crime, mystery, and thriller writing will love this book. I’m left eagerly anticipating what Stuart will do for an encore after writing such a brilliant and extraordinary debut novel.

Original Sin Press published For Reasons of Their Own by Chris Stuart from July 20, 2021. I purchased the copy of the book used for this review, representing my honest opinions.