Home » A Stranger From the Storm by William Burton McCormick

A Stranger From the Storm by William Burton McCormick—is an engaging, fast-paced historical mystery with plenty of surprising twists. 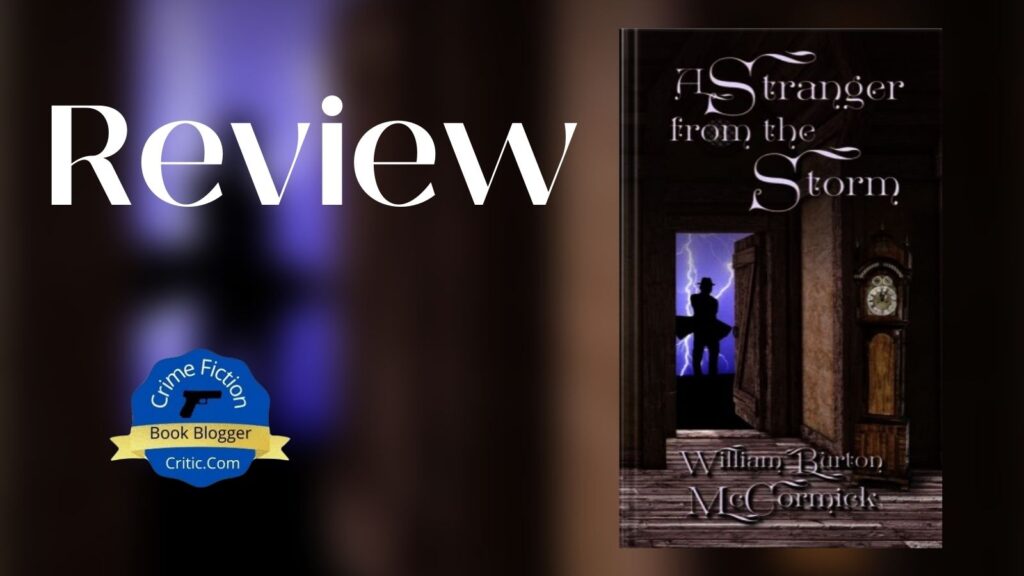 A Stranger From the Storm

The year is 1900. The port city of Odessa on the Black Sea is being terrorized by a brutal killer called the Specter. With five people already dead, the murderer promises more.

One family, the Karadopoulinas, run a boarding house. Sisters Tasia and Eleni feel certain the killer is a scarred, shambling Londoner who took lodging with them one night during a thunderstorm. Furtive and threatening, Henry Humble, stalks Odessa’s labyrinth of interlocking courtyards and foggy docks at night, armed with weapons and skeleton keys.

As the body count rises, so do the questions…

I don’t read a lot of historical fiction to include historical mysteries. So candidly, A Stranger From the Storm is not a book I’d likely have picked up to read on my own, even though the summary piqued my curiosity mildly. But I accepted the book as it was offered to me along with McCormick’s KGB Banker, and I’m so pleased I agreed to read it. This novella allowed me an entirely different view of McCormick’s writing, which I found intriguing and showed me that he is not only a skillful storyteller but also a versatile writer.

On July 9, 1900, shortly before midnight, twin fifteen-year-old sisters Tasi and Eleni are at home alone on a stormy night waiting for their mother, Maia Karadopoulina, to return home to the boarding house they live in and that Maia operates. Suddenly, they encounter a most peculiar man, an Englishman named Mr. Humble, in this fast-moving historical mystery novella from William Burton McCormick (KGB Banker), set in Odessa*, the third-largest city in Imperial Russia and the country’s second most important port, after St. Petersburg, at the time.

* Odesa is the modern preferred transliteration from Ukrainian.

Humble inquires about lodging for at least a fortnight (two weeks), and the Karadopoulina girls allow him into the parlor to await the arrival of their mother. She alone makes all the decisions on letting the rooms. When Maia gets home and before she learns of Mr. Humble’s presence, she tells her daughters there has been another murder in the Slavic quarter. A fiend prowling the quarter has claimed his sixth victim, all little children. In letters penned to the local newspapers, someone claiming to be the murderer uses the moniker the “Specter.”

Once Tasia remembers to tell her mother they have a prospective lodger, Maia speaks to Humble. She agrees to rent him a bottom-floor room, they settle on the price, and Mr. Humble takes up residence.

As time passes, a series of strange events cause Tasi and Eleni to increasingly suspect that their odd, eccentric lodger may well be the murderer, perhaps the Specter himself. Then something happens that makes them certain of it. So, they begin to investigate. What could go wrong? Quite a lot, actually.

While my first William Burton McCormick book, KGB Banker, both impressed and entertained me, this one is quite a different type of story, but one I found just as enjoyable to read. A novella, A Stranger From the Storm, is a quick read simply because of its length, considerably fewer pages than that of a full novel. But the fast-paced plot makes it seem an even speedier read.

McCormick does an admirable job of capturing and holding the reader’s interest from the opening chapter. The story unfolds from the points of view of the two fifteen-year-old sisters, Anastasia “Tasi” and Eleni Karadopoulina. The setting, Odessa on the Black Sea in 1900, when the city was still an important part of the Russian Empire and before the start of the revolution in 1905, was fresh and intriguing. McCormick capably gives readers a feel for what living in the city might have been like during that period. In addition, I felt the prose perfectly mirrored the period.

Something I found captivating about the two main characters, Tasi and Eleni, is that the deeper I got into the book, the more I forgot they were only fifteen-year-old girls as they seemed far older. That feeling was not at all inconsistent with the period setting of the book. No offense to contemporary teenagers intended, but fifteen-year-olds in 1900 bore little resemblance to today’s teenagers. From a very young age, parents and society imposed far more responsibility on children in those times than is now the case in our age of helicopter parenting. Thankfully, I’m not old enough to have grown up in that period. Still, even the children of my generation grew up with far greater responsibilities and consequently possessed considerably more maturity and life experience as teenagers than those of today. That’s what parents and society expected and required of us. It saddens me that so many parents today give so few responsibilities to their children and expect so little in the way of maturity from them. In my opinion, they do their children a grave injustice by hindering their children’s growth as individuals on the difficult journey towards adulthood. I mention this only to offer an example of how well McCormick did the job of providing us an authentic historical feel to the book and depth of characterization.

What I liked best about this book was the imaginative plot and the unexpected but welcome bits of comic relief that I, for one, find far too infrequently in mystery tales. The comedy adds both interest and texture to the story. There were also plenty of unexpected twists along the way to keep the pages turning.

While I don’t read much historical mystery fiction, I am a lifelong fan of Sir Arthur Conan Doyle’s Sherlock Holmes stories. I also enjoy reading some of the better modern Sherlock Holmes retellings that have grown popular since the expiration of the copyright on Doyle’s iconic detective character. So, I think it fair to say I’m capable of recognizing quality historical fiction and put The Stranger From the Storm firmly in that category.

For those who enjoy reading historical mysteries with a Victorian-era vibe, The Stranger From the Storm is a well-told, engaging story that is an entertaining read you’re sure to enjoy.

The Stranger From the Storm was published by Mannison Press, LLC, and the book is available from November 4, 2021.

I received an advance copy of the book used for this review, representing my honest and unbiased opinions.