The Soho Killer by Biba Pearce, a compellingly plotted and compulsive read, full of twists. 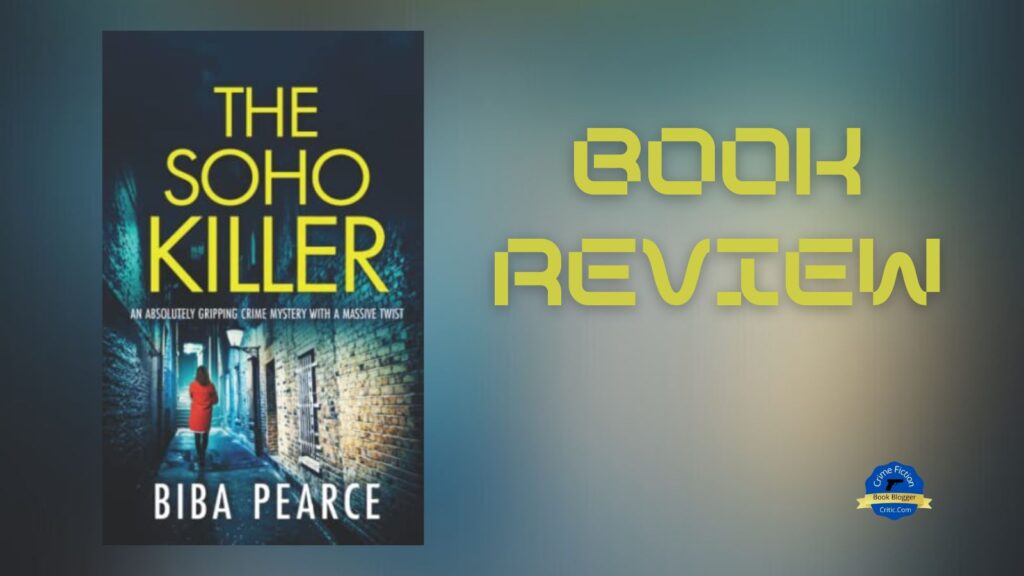 A serial killer who dumps the victims’ bodies in Soho Square. A sleepless detective thwarted by his box-ticking boss.

Detective Rob Miller thinks he’s seen it all, but this murder scene takes his breath away.

The victim is bound and gagged, with whip marks on his back. The location is one of the busiest squares in London. The cause of death appears to be strangulation.

Murder or a game gone wrong?

The prime suspect is the victim’s partner. Under pressure from his superiors, Rob makes an arrest despite his doubts.

But another body is found: bound, gagged and dumped in the middle of central London. Again, there are no witnesses.

Now Rob’s on the hunt for a serial killer with a fetish — and a talent for staying invisible.

Then the killer makes it personal . . .

The Soho Killer is the sixth title of Pearce’s Detective Rob Miller series, and the third I’ve read. While I’ve been reading the series from the beginning, I skipped ahead to read the latest series release. These are comfort reads for me in the sense I know what to expect. I can feel confident that Pearce will deliver it, and that’s always been the case. Far from formulaic as series like this sometimes are, with every book she delivers new imaginative crimes for Miller to solve along with many clever plot twists that keep us eagerly turning the pages.

Quite a lot has changed in our lead character’s life since the last book in the series I reviewed, The West London Murders. Rob Miller has promoted from Detective Inspector (DI) to Detective Chief Inspector (DCI) and now contends with the inconveniences of holding a supervisory position while trying to solve murders. He also reports to a new boss, Superintendent Felicity Mayhew and his Major Investigation Team features new members. Not only has DCI Miller’s work circumstances changed, Rob has a new wife and infant son at home to go along with his dog, Trigger, first introduced in the second book. And Trigger plays an important role in this story, always appreciated by dog lovers like me. DCI Miller and the former Jo Maguire, a detective who worked with Miller in previous cases, have married. Jo now works part time at MI5, which also plays a significant role in this tale.

These novels usually include one overarching mystery that gradually increases in complexity, and a couple of support acts in the guise of Miller’s personal life and dealings with his superintendent and other agencies. The same is true here, although Pearce offers more threads to follow than in earlier books. And, as usual, this sixth Rob Miller outing is tremendously good fun.

The book opens with an ominous, foreshadowing prologue featuring a murder occurring twenty years in the past. And then, after an unexpected, and unpleasant reunion with his long-estranged father, Ronnie (one of the support acts in this book), DCI Miller and his team get stuck into a rather bizarre murder investigation in Soho, not a part of London within their usual remit. A passerby discovers the body of a male victim, kitted out in a sadomasochism outfit on the lawn of a public park. The Major Investigation Team gets the case because the station with jurisdiction over the Soho district is overwhelmed with dealing with demonstrating activists. The initial investigation by Miller and his team reveals the victim is a married gay artist. But they aren’t certain if they have a homicide or an accidental death by erotic misadventure given the victim’s outfit, until Liz Kramer, the pathologist we met in previous books, confirms the victim, Michael Bennett, died from strangulation. The team must then consider the possibility of a hate crime as they get busy with the procedural minutiae of investigating a homicide, interviewing the victim’s husband, canvassing the area for witnesses, and reviewing CCTV recordings for clues to the identity of the killer. When interviewing the victim’s partner, Ralph Keaton, he tells Miller and the team neither Bennett nor he had any interest in BDSM and couldn’t imagine why his partner was found dressed in sadomasochism paraphernalia. That makes things even more baffling for the detectives.

No sooner has the Major Investigation Team started the Bennett investigation than someone discovers the body of a second male victim, dressed in the same peculiar sadomasochism outfit, and also tortured and raped by instrumentation, and then strangled. But this victim is an official in the British secret services, which adds further complexity to the mix. The team struggles to find something more than the obvious connection by M.O. which suggests the same killer that links the men, but shockingly find no hard evidence that the second victim was gay. But faced again with the specter he is dealing with yet another serial killer, DCI Miller calls on his old friend, Tony Sanderson, a renowned criminal profiler, to help his understanding of the suspect’s motive, and Sanderson joins the team as a consultant.

For those who enjoy reading crime mysteries, trying to work out the whodunit ahead of the police, Pearce brilliantly throws in plenty of red herrings along the way that mislead us. About midway through, I thought I’d figured it out, but discovered I was so wrong when Pearce finally revealed the killer at the shocking climax. And indeed, that was far from the only surprise Pearce offers us in this gripping story. I won’t say more to avoid spoilers, but will say in this latest Detective Rob Miller book, Pearce has compellingly plotted and produced a compulsive read that is full of devious twists. No doubt she will continue this excellent series since Pearce offered a few hints of future story threads to explore.

I received a copy of this book from the publisher via NetGalley for review purposes.

Get Your Copy of The Soho Killer on