The Art Merchant by British author J. K. Flynn is the first book in a brand new thriller series set in the mythical city of Belfield in the English midlands, featuring Detective Sergeant Esther Penman, a deeply flawed but relatable protagonist. Read my full review. 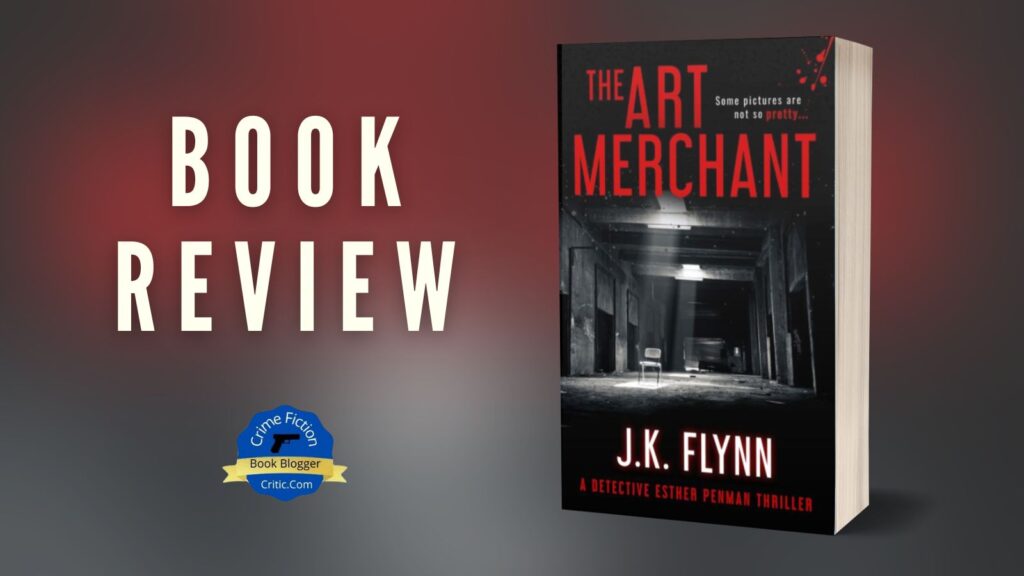 Some pictures are not so pretty…

Detective Sergeant Esther Penman is a mess. She drinks too much. She sleeps around. And her chief inspector is threatening to kick her out of CID and send her back to uniform because he doesn’t like her ‘attitude’.

Luckily for Esther, if there’s one thing she’s good at, it’s solving cases…

When a woman is killed in one of Belfield’s wealthiest neighbourhoods, Esther quickly realises it is no straightforward homicide. The husband has an alibi, but he’s hiding something, and Esther is determined to find out what.

A few days later, a man is found hanging in nearby woodland, and Esther’s suspicions of a deeper conspiracy begin to grow.

Once I received the review copy of The Art Merchant, I intended to read only a chapter or two to get a feel for the book before putting it aside to finish the book I was already reading before getting into it. But I surprised myself by getting so thoroughly engrossed in Esther Penman’s world that I couldn’t put this book down and read it in a sitting.

Flynn opens the story with a murder, and the game is afoot. Nothing particularly unusual about that since fans of the genre expect crime thrillers to start with a murder. But what is unusual and something I much liked about the opening scene is it’s not only a murder that should never have happened but it lands the killer in very dire straits where the police are the least of his worries.

When the cops arrive at the crime scene to investigate, we meet our deeply flawed but feisty and earnest protagonist, Esther Penman, a Belfield detective sergeant and former street cop. Her colleague and first-line supervisor, Detective Inspector Jared Wilcox, has one foot out the door as retirement beckons. But meanwhile, he struggles to contain Penman’s inclination to provoke their boss, DCI Warren Porter, who is already looking for an excuse to get rid of her.

Because of her abuse of alcohol, Penman has a habit of reporting late for work with hangovers and smelling of booze. And her behavior toward Porter is often borderline insubordinate. Wilcox attempts to protect his colleague from her self-destructive behavior, because he recognizes Penman is a skilled and talented investigator. But so close to retirement, he is loath to put his career in any serious jeopardy to do so. Not to mention, Wilcox has personal problems of his own to deal with.

Penman and Wilcox pick up the murder of the woman described at the opening. Naturally, since statistics show that their intimate partners kill more than half of all female homicide victims, the detective’s initial focus is on the victim’s husband, Charles Gorman. When they go to interview Gorman at work, he tries to flee from them and his suspicious behavior appears to implicate him. Yet after they interview Gorman, the detectives feel Gorman might not be guilty of the murder after all. Still, Penman’s instincts tell her Gorman is involved in something dodgy, something that might have provoked the murder of his wife. And Esther is determined to find out what Gorman has himself mixed up in. But before she and Wilcox gain traction in the investigation, a new suspect comes to light. DCI Porter, convinced the newly identified suspect is the perpetrator, considers the case solved and despite Penman’s protests, closes the investigation. Livid over his decision, which smacks of department politics, the strong-willed detective persists in continuing to investigate which predictably lands her in even more hot water with her boss when he finds it out, putting her career in serious jeopardy.

Esther Penman isn’t an immediately likeable character as the book unfolds. An attractive, single woman in her thirties, although dedicated to her work, lacks control over her personal life and irresponsible behavior as the synopsis notes.

“Detective Sergeant Esther Penman is a mess. She drinks too much. She sleeps around.”

While DCI Porter is a contemptibly obnoxious person, Penman’s difficulties with him are equally of her own making, so it is hard to muster much sympathy for her even when you understand her thought processes and don’t think she is wrong about continuing the investigation.

Some redeeming qualities counterbalance Penman’s flaws, such as her skill as an investigator, her resolute commitment to her work, and the ethos of what she does (upholding the law, seeking justice, and catching the baddies). Yet her failure to behave more responsibly in her personal life contaminates all that and feels frustrating, especially since those negative aspects bleed over into her work performance. However, as Flynn deftly works Esther’s backstory into the narrative, revealing her darkest secrets, Penman’s flaws suddenly make sense. The motivations behind the excessive drinking and the promiscuous lifestyle become clear. That’s when Esther Penman becomes most human, relatable, and earns our sympathy. What we learn about her doesn’t absolve Esther, but at least helps us understand why Penman is so flawed.

As her character arc plays out over the course of the story, our opinion changes and Esther becomes very likeable and her quirks annoy us less. This is a testament to Flynn’s strong story-telling ability and attention to detail. Esther Penman reminds us there are shades of gray in life lurking between the black and white, between the wrong and right. No one is really all good or all bad.

This book and the events described within feel real, as if the author makes the reader privy to real life pain, anger, and guilt. Flynn drives this home with the most powerful and impressive scene in the book for me where Esther visits her estranged mother, whom she has had no contact with for fifteen years. I won’t indulge in a spoiler by giving away the details, but will admit that the scene resonated with me on a deeply emotional level. Even though I’m no softie, Flynn had me blinking back a few tears there. And to me, that’s the measure of fine storytelling, touching the reader’s emotions. That’s what makes you remember a book long after you’ve turned the last page.

Flynn brilliantly combines suspense and pathos in this remarkably assured debut, balancing the taut plot and the hero’s inner journey toward transformation perfectly as the action builds to a startling conclusion. Fans of crime thrillers with a strong female lead shouldn’t miss The Art Merchant, a debut novel that punches well above its weight. Flynn’s work is thoughtful and provocative, moving and meaningful. I’m eagerly looking forward to reading the second book in the Esther Penman series, Vengeance, due out in Autumn 2023.

I received an advance copy of the book from the publisher used for this review, which represents my own honest opinions.

Get Your Copy of The Art Merchant on