Home » Book Review: The Law of Innocence by Michael Connelly

Confession. While I can’t get enough of Michael Connelly’s crime fiction, the Mickey Haller Lincoln Lawyer novels aren’t my favorites. And there is a reason for that, good or not. After twenty-five years of law enforcement experience, I’m not a fan of criminal defense attorneys, even fictional ones. So, I’m hard pressed to see a defense attorney protagonist as anything more than an antihero, at best—a main character in a story who lacks conventional heroic qualities and attributes, such as idealism, courage, and morality.

I get it on some level when defense attorneys use the shopworn saying, “Every defendant deserves a vigorous defense.” But that’s hard to reconcile with reality sometimes. Does anyone really believe Charles Mason deserved a vigorous defense? How about a man in a jealous rage that the evidence showed brutally stabbed to death his ex-wife and her boyfriend? Maybe the maxim should be, “Every innocent defendant deserves a vigorous defense.” Still, I understand that under our system, we presume everyone innocent until proving them guilty, so I know why that can’t be so.

Anyway, I admit it. Even I could summon a little sympathy for Haller this time around when the cops find a body in the trunk of his Lincoln after a pretext stop and then arrest and charge him with a murder he didn’t commit.

While a work of fiction, this Connelly gem considers complex issues and draws on important themes around innocence and guilt, around law and order, as well as the imperfections and strengths of our justice system. It’s probably my favorite Mickey Haller novel to date and one of my favorite books this year. 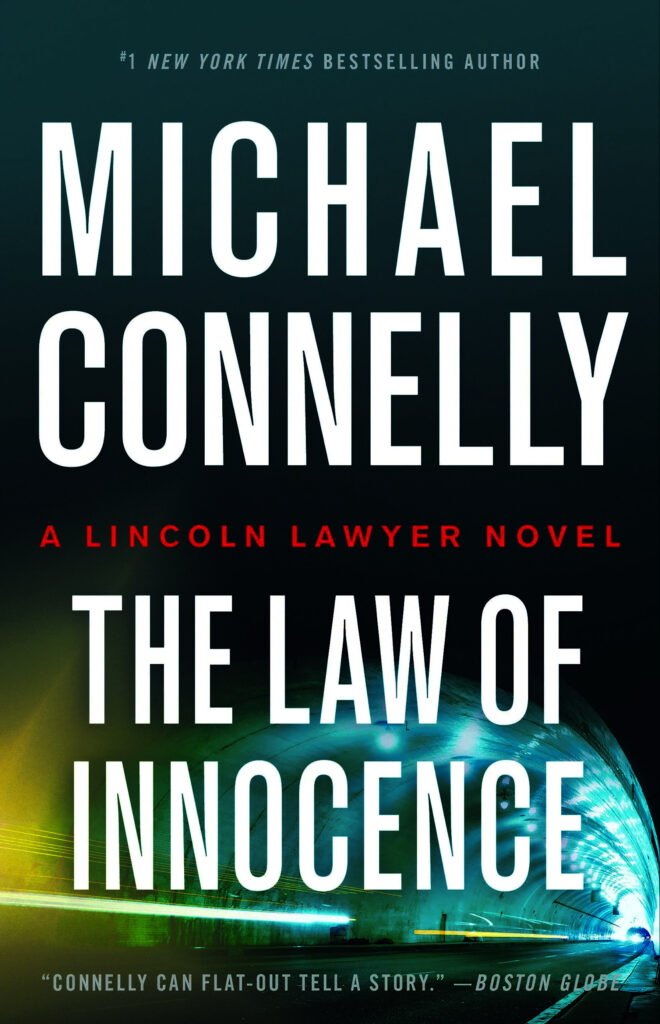 THE LAW OF INNOCENCE

On the night he celebrates a big win, defense attorney Mickey Haller is pulled over by police, who find the body of a former client in the trunk of his Lincoln. Haller is immediately charged with murder but can’t post the exorbitant $5 million bail slapped on him by a vindictive judge.

Mickey elects to represent himself and is forced to mount his defense from his jail cell in the Twin Towers Correctional Center in downtown Los Angeles. All the while he needs to look over his shoulder—as an officer of the court he is an instant target, and he makes few friends when he reveals a corruption plot within the jail.

But the bigger plot is the one against him. Haller knows he’s been framed, whether by a new enemy or an old one. As his trusted team, including his half-brother, Harry Bosch, investigates, Haller must use all his skills in the courtroom to counter the damning evidence against him.

Even if he can obtain a not-guilty verdict, Mickey understands that it won’t be enough. In order to be truly exonerated, he must find out who really committed the murder and why. That is the law of innocence.

The infamous LA criminal defense lawyer, Mickey Haller, “The Lincoln Lawyer” draws the most important case of his life. When someone frames him for the murder of a former client, Haller ignores the adage, “A lawyer who represents himself, has a fool for a client,” and leads his own defense. Everything is on the line—his reputation, his livelihood, his family, and his freedom.

After winning another trial, Haller hosts a celebration at a downtown LA defense bar. When he leaves the bar, a LAPD cop named Milton immediately pulls over Haller’s Lincoln. After rousting Haller from the car, Milton escorts him to the back of the vehicle and points out the rear license plate is missing. Moments later, the cop notices a blotch of liquid on the pavement beneath the car’s rear bumper and asks, “Is that blood?” Within moments, Haller is sitting in the back of the patrol car in handcuffs while Milton opens the Lincoln’s trunk, claiming “exigent circumstances.” Inside the trunk, the officer finds the body of Sam Scales, one of Haller’s former clients. Milton arrests Haller for murder and Haller finds himself in the Twin Towers Correctional Facility in downtown Los Angeles unable to post the $5 million bond.

There are few crime writers today that I’d mention in the same breath as Michael Connelly. He’s that good, a natural born storyteller with the writing chops to tell them and tell them exquisitely. I found it impossible to put down this book after turning the first page.

One pleasant surprise was finding Harry Bosch in this Haller novel. I’d say Bosch played a bigger role in this book than in the latest Ballard and Bosch novel, The Dark Hours (2021). Those who have read other of Connelly’s books know that Bosch and Haller are half brothers. I’d say Bosch features in this novel almost as prominently as in another Haller book, The Reversal (2010). That’s reason enough for a diehard Bosch fan to read and enjoy The Law of Innocence.

I like the way Connelly refers to current events in his novels, and naturally the outbreak of coronavirus features in this one. It interested me the way he wove that into the story. Connelly also touches on some other important issues that are still making headlines today—issues like the fairness of our judicial system as viewed through the “equity” lens, the law of innocence, and that innocent people sometimes get convicted for crimes they didn’t commit.

I think Connelly created a near perfect plot around how an innocent person might end up arrested, charged, and prosecuted for a murder they didn’t commit. And using a criminal defense attorney like Haller as the victim of a miscarriage of justice made the story even more appealing. Haller sees the justice system from the perspective of the clients he has defended in the past and experiences the visceral feeling of facing the loss of his freedom.

A cornerstone doctrine of American jurisprudence, to paraphrase William Blackstone, is that “it is better that ten guilty persons go free, than that one innocent person be convicted.” In this novel, that doctrine gets turned on its head when a bent cop arrests Haller during a pretext traffic stop and then an overzealous prosecutor attempts to railroad Haller into prison using whatever means necessary.

In the book, Connelly drives home the point again and again that innocence is an imperfect shield and innocent people get wrongly convicted and sent to prison. It’s a fair point to make, and an excellent technique for building suspense in a book of fiction. Most of us have probably read or heard news stories about people going to prison for crimes they didn’t commit, especially people exonerated after the rapid advances in DNA evidence processing and interpretation. Still, as someone who worked inside the criminal justice system for over two decades, I believe I can say with some confidence that innocent people going to jail is so rare that calling it rare may even be an overstatement.

The imperfect system, in my estimation, isn’t what many social justice activists would have us to believe these days. The fault can’t be laid at the feet of the police or prosecutorial misconduct. It has little to do with racism or an unattainable ideal called “equity.” When an innocent person gets convicted and goes to jail for a crime they didn’t commit, we can usually explain the cause using simple economics. The proverb, “You get what you pay for,” is never more appropriate than when you’re discussing “justice” in this country. You get as much “justice” as you can afford to pay for in terms of what kind of lawyer you can afford to hire.

If you’re a wealthy, famous ex-football star and can afford a phalanx of the best, brightest, and most expensive criminal lawyers in the land, you can probably commit an infamous double homicide and walk out of court with a not guilty verdict. But what if you live in, let’s say, the West Adams neighborhood of South LA and you’re poor? If you get arrested and charged with a murder, even one you didn’t commit, you will probably end up with a public defender as counsel with what many term “unconscionable caseloads,” representing as many as seventy clients, with some public defenders so stressed out that they become physically ill. Good luck with that. You’re probably headed to a California state penitentiary. You might say, every defendant deserves a vigorous defense to rationalize defending people you know committed murder, rape, or armed robbery, and doing your best to get them off. But in reality, only those who can afford it get a “vigorous defense.”

The corrosive effects of overstating the premise that innocent people get convicted of crimes and go to prison is people lose faith in the fairness of the criminal justice system. When that happens, we get district attorneys who stop prosecuting violent criminals in the name of “equity.” And when that happens, a violent offender who should have still been in jail for his last violent criminal episode gets a low bail and then gets in his vehicle in Waukesha, Wisconsin. Then he plows it into a crowd of innocent people watching a Christmas parade on Main Street, killing six and injuring many more.

The people of LA can rest easy knowing there is no Dana Berg prosecuting cases in Los Angeles county these days with a district attorney there far more interested in “equity” than protecting innocent citizens from predators. Nowadays, there are probably thousands of guilty persons going free instead of one innocent person getting convicted. That’s how it works when you choose not to prosecute anyone.

But, I’ve digressed. So, back to the book, The Law of Innocence is one of the best crime novels I’ve read this year. The book grasps your attention from the start and hangs on through the end, giving you a roller coaster ride of thrills and twists. Connelly’s handle on LA law and order is masterful and suspenseful scenes abound. Fans will be delighted. I only wish I’d read it sooner.

Hachette Book Group published The Law of Innocence by Michael Connelly on November 10, 2020. I purchased the hardcover edition used for his review, representing my honest opinions.

2 thoughts on “Book Review: The Law of Innocence by Michael Connelly”