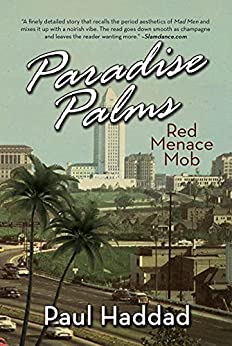 “It is October 1957. A time of Eisenhower conformity, police and mob strongholds, and Red Scare paranoia. A relic of Hollywood’s Golden Age, the aging Paradise Palms Hotel is on the brink of change. David Shapiro—eldest son of recently widowed Max Shapiro—has assumed a leadership role. But the more he digs into the hotel’s business, the more he questions who his father is. It’s not just the tenuous ties to gangster Mickey Cohen, who is trying to commandeer “the Palms,” but also the sudden appearance of a mysterious African American guest named Rae Lynn, who improbably rises in stature. As long-buried secrets come to light, David’s battle to keep the family intact takes a tragic turn. His actions mirror an America lurching from the surface simplicity of the ’50s to the turmoil of the 1960s in this riveting neo-noir family saga.”

The book, set in 1957 Los Angeles, is the story of a Jewish family that owns and operates a motel in Hollywood called Paradise Palms.

Like Hollywood itself, the motel has seen its better days and is in steady decline. When Marta Shapiro, the matriarch of the family, dies, it seems clear that her elderly husband Max, because of old age and the distractions of his 29-year-old bimboish, gold digging girlfriend, cannot keep Paradise Palms afloat financially on his own. So, David, Leo, Aaron, and Rudy, the four Shapiro brothers, pitch in to help run the place, intent on saving their inheritance.

The story unfolds from multiple points of view, though mostly from David’s, the eldest Shapiro brother. He is the closest to being the book’s protagonist, although all the siblings play important roles for different reasons.

Besides the Shapiros, Paradise Palms: Red Menace Mob has a host of other interesting, fully developed, realistic characters—from key motel staff members to a self-styled “facilitator,” Vance “Red” Gordo. Gordo, it turns out, is a small-time hood with connections to Los Angeles organized crime. One of the book’s early mysteries the Shapiro brothers face is why their father Max has some deep, unexplained connection to Gordo and insists on doing business with him despite Gordo being an obvious crook. The Shapiro brothers and the reader come to understand the connection as the story plays out.

David Shapiro is my favorite character in the book. As the eldest, he feels a heavy responsibility to save the family business from bankruptcy and looking out for his siblings. We learn David was something of a father figure to his brothers during their growing up years because Max Shapiro was an emotionally distant parent, often absent because of his involvement in extra-marital affairs. David always had ambition, but his entire life was dogged by ill fortune, and he never quite succeeded at anything, causing him to feel he is cursed.  But, David eventually becomes a prototypical reluctant hero when circumstances leave him no choice.

Frankly, little action takes place in the first several chapters or so, usually a deal-breaker for me as a reader. Instead, the author deftly captures and keeps the reader’s attention with building the setting, fleshing out the characters, and providing backstory that proves important to understand what comes later. And, the action one expects from a novel in this genre does appear near the midpoint.

The way Haddad tells his story is striking, and the beauty of this book is in his writing. It’s haunting and gritty and quite often feels hopeless. It feels as if the words weigh more than they should. They both burdened me and transported me—not just to 1957 Los Angeles and the Shapiro’s world, but to a place requiring something of me.

Haddad does a masterful job accurately portraying 1957 Los Angeles and Hollywood, touching on nearly every defining cultural aspect of the times—Los Angeles mobsters, LAPD corruption, racism, bigotry, the space race, and the early days of the Cold War with its fears of nuclear annihilation. In addition, the book features prominent locations in and around Los Angeles that will be familiar to any reader knowledgeable of the city. From those perspectives, Paradise Palms is one of the best books set in Los Angeles I’ve read in a long while.

This novel could feel depressing, but I see it as reflective. It asks something of the reader that is both confronting and fascinating. While a work of fiction, I feel Paradise Palms is quite an instructive read in these overly politicized times where pseudo-intellectual, self-serving activist shills repeat their nonsensical mantras about how America was founded on racism and remains irredeemably mired in racism and bigotry. Haddad exposes much of the ugliness present in Los Angeles and the country in the 1950s. But, even a cursory comparison between the cultural realities of 1957 as accurately depicted in this novel and today’s circumstances amply demonstrate just how far our society has progressed in the right direction over the past six decades.

When it comes to hard-boiled noir crime fiction, don’t expect you will be reading Chandler or Hammett if you pick up a copy of Paradise Palms: Red Menace Mob. But don’t be surprised if you find similarities here to the works of another giant in the genre, Elmore Leonard. Approach the book with patience and without preconceptions, and it will reward you. It’s a fine novel that captures and holds your interest to the end.

I received a copy of this book from the publicist for this review, representing my honest and unbiased opinions.