Pesticide by Kim Hays is a satisfying international whodunit with a strong female lead and a fascinating Swiss setting. 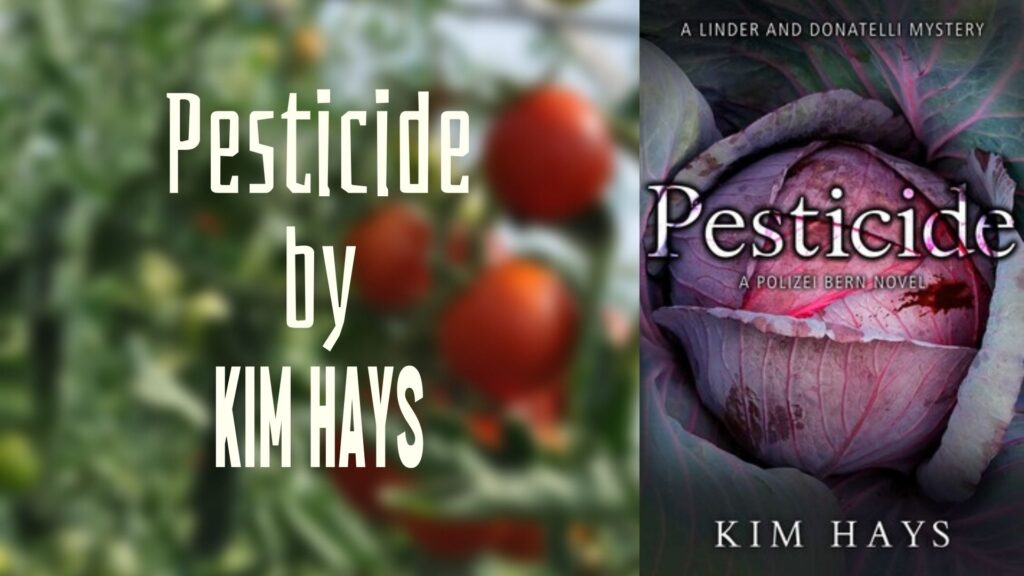 A publicist acquaintance knowing of my passion for international crime fiction, suggested I’d like the debut mystery in the Polizei Bern series, Pesticide by Kim Hays. She certainly wasn’t wrong. It’s one of the best novels I’ve read this year. I’m only sorry it took me so long to get it on my list. I couldn’t put it down from the first page and inhaled it in one sitting. I had the opportunity to read an ARC back in May but decided to purchase and read the copy used for this review. I very much enjoyed meeting the protagonist, Giuliana Linder, a homicide detective in Bern, Switzerland, and a host of other interesting support characters, including Linder’s colleague, Renzo Donatelli. 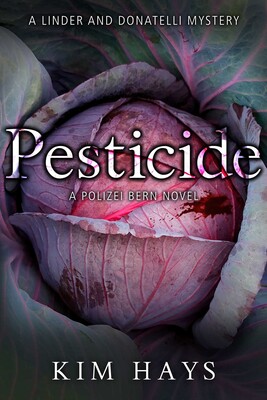 Bern, Switzerland—known for its narrow cobblestone streets, decorative fountains, and striking towers. Yet dark currents run through this charming medieval city and beyond, to the idyllic farmlands that surround it.

When a rave on a hot summer night erupts into violent riots, a young man is found the next morning bludgeoned to death with a policeman’s club. Seasoned detective Giuliana Linder is assigned to the case. That same day, an elderly organic farmer turns up dead and drenched with pesticide. Enter Giuliana’s younger—and distractingly attractive—colleague Renzo Donatelli to investigate the second murder. Giuliana’s disappointment that they’re on two different cases is tinged with relief—her home life is complicated enough without the risk of a fling.

But when an unexpected discovery ties the two victims into a single case, Giuliana and Renzo are thrown closer together than ever before. Dangerously close. Will Giuliana be able to handle the threats to her marriage and to her assumptions about the police? If she wants to prevent another murder, she’ll have to put her life on the line—and her principles.

Combining suspense and romance, this debut mystery in the Polizei Bern series offers a distinctive picture of the Swiss. An inventive tale, packed with surprises, it will keep readers guessing until the end.

We get two cases for the price of one here, and though they are ultimately linked (directly rather than coincidentally), I liked the way Hays introduces them. First, homicide detective Giuliana Linder draws a case investigating whether a civilian died due to a young Bern police officer using excessive force. Shortly after Giuliana and her partner begin investigating, the police learn someone murdered another man, a pioneer in Swiss organic farming, just thirty-six hours before the man died after the young cop struck him in the head with his riot baton.

Once Linder identifies her victim, connections to the murdered farmer quickly develop. As the story unfolds, the police try to determine what the connections mean, whether the young police officer killed the civilian or someone else did after the initial confrontation and whether they are hunting one or two murder suspects.

After the Bern police organize a task force to investigate the two murders headed by Linder and another senior detective, Renzo Donatelli, Linder’s younger and distractedly attractive colleague (who she has worked with before) gets brought in to help investigate the cases. Donatelli has a difficult marriage, and Linder’s marriage is also a bit tenuous. Also, Donatelli and Linder are strongly attracted to each other. This romantic twist adds complications and forms an intriguing subplot. The relationship adds an extra layer to both characters that helps us understand their respective lives and personalities more.

The Crime Writers’ Association shortlisted Pesticide for the 2020 Debut Dagger award, which didn’t surprise me to learn after reading the book. Hays offers readers a realistic and tightly plotted story that grips the attention from the start, and the near-perfect pacing keeps us engaged to the end. This novel is not just uncommonly good for a debut. It compares favorably with novels I’ve read authored by crime fiction writers with far more books under their belts. Pesticide is one of the two best crime fiction books I’ve read thus far this year.

In her acknowledgments at the end of the book, Hays explains she called upon high-ranking police officers in the Swiss cantonal police for insight while writing the book. While I have no firsthand knowledge about policing in Switzerland, I can say this explains why the police procedural aspects of Pesticide fit almost flawlessly the investigative tactics and techniques I know about used by other European police agencies. As a result, I have only one minor quibble with the novel’s realism.

In one scene, when circumstances force a police officer to employ deadly force, they intentionally shoot the suspect in the shoulder, careful to avoid hitting the arm and shoulder joint. As a former American police officer, I must say it doesn’t work that way except in the movies. Deadly force is always the measure of last resort, used when nothing else will do. And in a situation where a police officer decides they must use deadly force, they do not intentionally aim to wound anymore than they aim to kill. Instead, the intent is to stop the threat, and armed police officers constantly train to shoot center mass (the largest target) because that is the most reliable tactic for stopping the threat. So, the scene mentioned isn’t realistic, which most crime fiction fans find distracting because they put such high value on realism in any police procedural. It’s fine if a cop in a novel shoots someone, aiming at center mass, but ends up hitting them in the shoulder or some other non-fatal area, and the suspect survives. But realism demands that a writer avoid crafting a scene that features a tactic no trained police officer would employ.

Aside from the one tiny criticism, which didn’t detract at all from this book for me, Hays offered up a complex plot (or two), several surprises and some very likeable characters it’s easy to root for. I loved the book and believe any fan of international crime mysteries would enjoy this fast-paced read. I’m happy Pesticide is the debut in a promised series as I’m eager to meet Linder and Donatelli again in the next novel in the series.

I purchased the copy of the book used for this review, which are my own honest opinions.