Home » What Meets the Eye by Alex Kenna Review

What Meets the Eye by Alex Kenna, an electric and polished debut thriller that explores the dangers of unbridled ambition, greed, and quests for revenge. Read my full review. 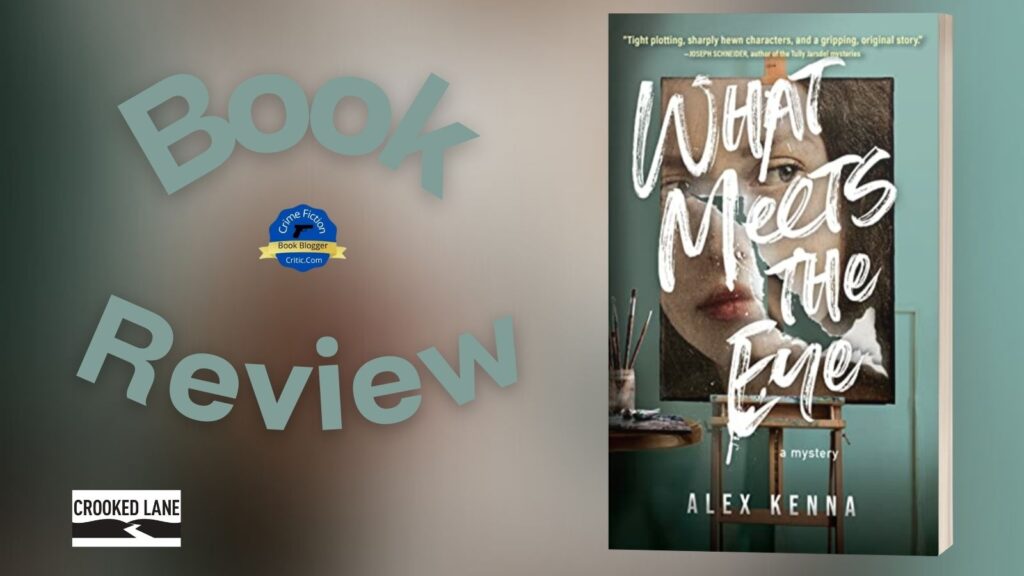 What Meets the Eye Synopsis

Kate Myles was a promising Los Angeles police detective, until an accident and opioid addiction blew up her family and destroyed her career. Struggling to rebuild her life, Kate decides to try her hand at private detective work—but she gets much more than she bargained for when she takes on the case of a celebrated painter found dead in a downtown loft.

When Margot Starling’s body was found, the cause of death was assumed to be suicide. Despite her beauty, talent, and fame, she struggled with a host of demons. But as Kate digs deeper, she learns that Margot had a growing list of powerful enemies—among them a shady art dealer who had been selling forged works by Margot. Kate soon uncovers a dirty trail that leads straight into the heart of the city’s deadly underworld.

Margot died for her art—and if Kate doesn’t tread lightly, she could be the next to get brushed out.

What Meets the Eye by Alex Kenna gives us everything we expect from a thriller. It’s a twisty and absorbing read, complete with a suitably flawed but very likeable lead. Alex Kenna is the real deal, a true talent. Her prose is stunningly eloquent and characterization masterful. Thematically, Kenna delivers obvious messages about ambition and revenge and the dangers they pose when left unrestrained, along with a powerful theme around sexual exploitation and violence against women that reminds us how infuriatingly endemic both remain within our society.

The book opens with a prologue set six months prior to the present day that ends with a bang. We meet Margot Starling, a beautiful, talented, ambitious, and highly successful artist, but also a tortured soul. We’re learning a little of Margot’s backstory when someone knocks on her door. Peeping out, she gasps and drops the glass of whiskey in her hand, the glass shattering on the floor. And masterfully, Kenna has arrested our attention, leaving us desperate to learn more.

Moving into present day in the first chapter, Kenna introduces us to the engaging lead, Kate Myer, a former LAPD detective turned private investigator. An on-duty incident not only left Kate with severe back injuries that ended her law enforcement career, but in turn, addicted to pain pills. The addiction cost Kate her already shaky marriage, as well as custody of her daughter, to her cold and unfeeling attorney ex-husband. Kate, after beating the narcotics addiction, is still struggling to pick up the pieces, trying to rebuild her confidence and her life into something approaching normalcy. When Milt Starling comes to Kate, he tells her the police have ruled his daughter’s death a suicide, but insists she wasn’t suicidal. He believes someone murdered her and wants to hire Kate to prove it. Kate is reluctant to take the case. A former police detective, she knows the cops usually get such things right and so believes she would only take Starling’s money to deliver more pain rather than comfort by confirming the death was suicide. The more Starling tells her about his daughter, the more certain Kate is the woman killed herself. But Starling is persistent, and Kate needs to pay her rent. So she relents and accepts the case. The lives of Kaye Myers and Margot Starling then become intertwined. And while she had no way to know it at the outset, Kate’s fateful decision has thrust her into something she doesn’t truly grasp and that comes with personal risks she can’t even imagine.

Time shifts between chapters. Sometimes it’s days. Sometimes months. And sometimes several years pass before we return to the present. Interspersed with the time shifts are multiple narrators offering differing perspectives. I’m not usually a fan of flashbacks, mostly because authors rarely do the technique well and often it causes the pacing of a novel to suffer. But it all works here because Kenna pulls it off seamlessly without detracting from the unfolding events in the present. Also, Kenna’s use of multiple narrators is a creative and effective way of giving readers snippets of the backstory and baggage of the primary characters without it being a distraction.

“And frankly, I’m competent despite my shortcomings. I’m a better-than-average PI. In another life, I was a damn good detective.”

Kate Myers is a deeply flawed character. Flawed protagonists have become a staple in crime fiction, almost an overused trope. And often authors find it hard to balance their characters faults or foibles with relatability and likeability. But in Kate, Kenna gives us a character who we engage with effortlessly, realizing without having to think about it that her flaws help make her feel like a real person, almost like a friend. Someone we feel we know intimately and understand. And she certainly wrings out our emotions by the time this book ends.

What Meets the Eye is a riveting read that deftly entangles the reader in the narrative as it unfolds in the past and present via multiple narrators. Kenna’s writing feels effortless, but we know that reflects the skill required to remove the focus from the words, making them mere vehicles that transport the reader into the story itself. Here the characters become real people, making us forget they exist only because someone clever and talented created them for us.

This is a book that will appeal to lovers of fast-paced thrillers and readers who enjoy novels with strong prose and characters.

I received an advance copy of this book from the publisher for review purposes.

Get Your Copy of What Meets the Eye on