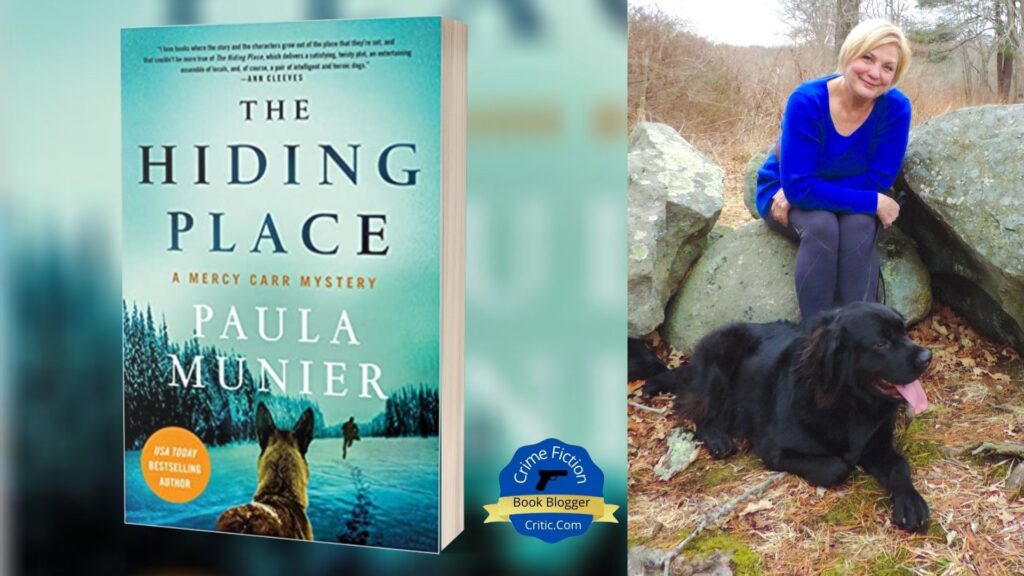 When the man who killed her grandfather breaks out of prison and comes after her grandmother, Mercy must unearth the long-buried scandals that threaten to tear her family apart. And she may have to do it without her beloved canine partner Elvis, if his former handler has his way….

Some people take their secrets with them to the grave. Others leave them behind on their deathbeds, riddles for the survivors to solve.

When her late grandfather’s dying deputy calls Mercy to his side, she and Elvis inherit the cold case that haunted him―and may have killed him. But finding Beth Kilgore 20 years after she disappeared is more than a lost cause. It’s a Pandora’s box releasing a rain of evil on the very people Mercy and Elvis hold most dear.

The timing couldn’t be worse when the man who murdered her grandfather escapes from prison and a fellow Army vet turns up claiming that Elvis is his dog, not hers. With her grandmother Patience gone missing, and Elvis’s future uncertain, Mercy faces the prospect of losing her most treasured allies, the only ones she believes truly love and understand her.

She needs help, and that means forgiving Vermont Game Warden Troy Warner long enough to enlist his aid. With time running out for Patience, Mercy and Elvis must team up with Troy and his search-and-rescue dog Susie Bear to unravel the secrets of the past and save her grandmother―before it’s too late.

The Hiding Place by Paula Munier is the third installment in the Mercy Carr Mystery series. I haven’t read the first two books in the series, but when I started seeing this novel popping up on the crime fiction websites I visit regularly, the buzz intrigued me, so I requested a copy to discover for myself what all the excitement was about.

The granddaughter of a former sheriff, Mercy Carr, pays a visit to her late grandfather’s dying deputy, August Pitts, at his request. Pitts asks Mercy to investigate the case of a missing girl that neither he nor her grandfather had solved. Mercy is determined to work the cold case once she learns the details surrounding it from her grandmother, Patience. Eventually, her sidekick, Troy Warner, a Vermont game warden helps her with the investigation. Mercy has developed a reputation for solving mysteries that have baffled local law enforcement.

Mercy is an interesting character, a former U.S. Army MP who saw action in Afganistan who is still struggling to come to terms with the death of her fiance, another soldier and a dog handler killed there. Honoring his last request, Mercy adopted her late fiance’s work dog, a Belgian shepherd named Elvis, who figures prominently in the book. The novel predominantly unfolds from Mercy’s point of view. She’s still living in her childhood hometown in Vermont. After reading the synopsis, I assumed Mercy was a private investigator, but after reading the book discovered she is more a Jessica Fletcher like amateur detective.

Mercy’s personal life is a bit of a mess. She is struggling not only with her fiance’s death, but with the fallout from her experiences in Afghanistan as a soldier. Both her parents are lawyers, and her somewhat over bearing mother had expected Mercy to follow her parents into law, but Mercy had no interest in becoming an attorney and intends to blaze her own trail. This is also a source of friction. Her relationship with Troy Warner which had previously leaned more toward romance than only friendship is strained. But a part of her wants to forgive him for a lie of omission, and to further explore the possibilities.

What began as an inquiry into the cold case becomes more complicated when the man who killed Mercy’s grandfather escapes from prison and then someone leaves a bomb on her grandmother’s doorstep that explodes and injures both Mercy and her her grandmother, the local veterinarian. A fresh murder occurs and a decades old murder is uncovered and for Mercy and Troy, the present and past intersect in ways they could not have imagined.

Munier puts us occasionally in the heads of other characters–usually significant ones to give us some hints or clues to help us work out the whodunit.

There are a few undercurrents simmering in this book, including themes around grief, loss, love, and trust.

I enjoyed this novel even though I hadn’t read the first two books in the series. Munier has given us some interesting and likeable characters in Mercy, as well as her sidekick Troy, her grandmother Patience, her mother Grace and a host of dogs including Elvis.

The Hiding Place is a traditional mystery with a well-crafted plot, a very conservative story featuring a comfortable social structure (a small town in Vermont), which is shockingly disrupted by a crime. An amateur attempts to solve the mystery through traditional investigative techniques. Like all traditional mysteries, even given today’s rather permissive society, the novel contains no offensive language, dramatic violence, perversion, or sex.

This book is perfect for traditional mystery fans who enjoy a touch of romance and prefer books that don’t contain swear words or other offensive language. And dogs—we mustn’t forget the dogs. You must love dogs.

St. Martin’s Press published the Hiding Place by Paula Munier under the Minotaur Books imprint, and the book is available from March 30, 2021.

I received a copy of this book from the publisher for review purposes.