The Darkest Hours by Margaret Murphy—a psychological thriller that grips from start to finish. 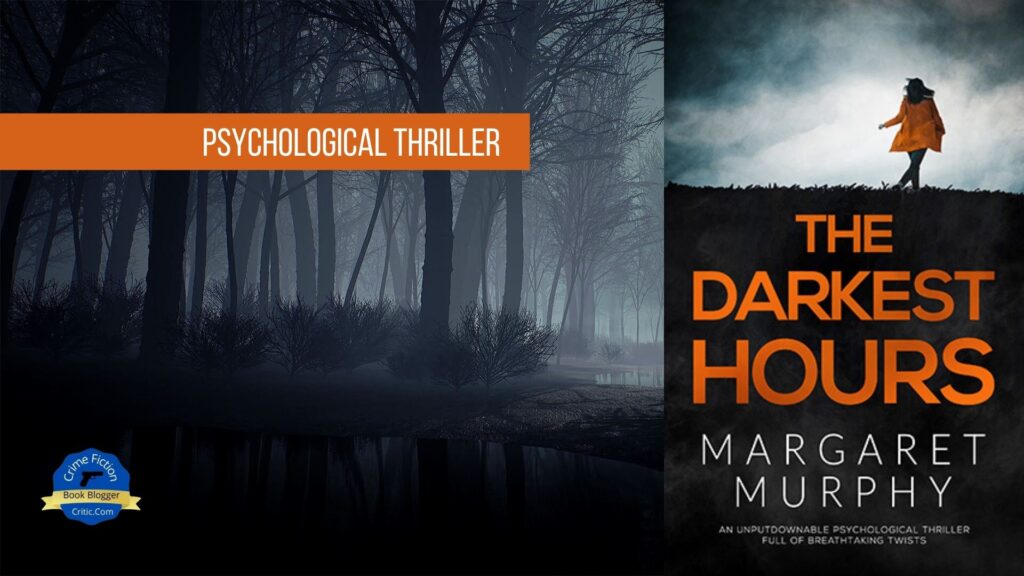 Available in print and electronic versions.

In the darkest hours, he will come for you.

Snatched by a prowler in the night.

Brilliant psychologist Christine Radcliffe fears she may be next. Or at least that is what she tells Detective Alan Jameson.

But Jameson already has the prime suspect in his sights.

And it’s someone much closer to Christine than she wants to admit.

Who is she protecting?

When two women go missing, the authorities learn that there is a connection. Both are social workers who were both once associated with a children’s home where there was a scandal. That leads the police to investigate the women’s past clients, including parents and children sent to the home who are now, ten years later, adults. The police zero in on one possible suspect in the abductions, Philip Greer, a parolee who in his youth was one of the troubled children the missing social workers worked with.

When detectives attempt to interview him at home, Greer, still emotionally disturbed as an adult, has a melt-down. He assaults them and does a runner. That’s when his foster sister, educational psychologist Dr. Chris Radcliffe, gets involved. Knowing Greer perhaps better than anyone and fearing Greer might hurt someone or get hurt in a confrontation with the police, she searches for Philip herself, hoping to find him before the police do. Once Radcliffe comes to the attention of DCI Alan Jameson, he discovers she was also associated with the same children’s home at the same time as the missing women and fears she may become the abductor’s next victim.

Once they meet, Radcliffe aids DCI Jameson in the investigation to a degree, but still pursues her own separate unorthodox investigation to clear Philip Greer as a suspect. As she grows closer to exposing the villain’s identity, she faces threats to her life, and events that expose her own troubled childhood when she was abused by her father. The stakes escalate to the breaking point once Chris confronts potential suspects, all young men who were troubled youths connected to the children’s home at the time of the scandal.

The Darkest Hours is a psychological thriller that pits both the police and a psychologist as an amateur sleuth against an extremely dangerous serial killer. It’s truly difficult to summarize the book in only a couple of paragraphs since there is so much going on in this tense, suspense-filled thriller. Not only do we have the police’s desperate struggle to identify the suspect and find the missing social workers before it’s too late, we have Chris Radcliffe putting herself in harm’s way by confronting suspects alone while she is also dealing with her demons from the past.

I was disappointed initially once I felt I’d worked out who the villain was about three-quarters into the book (and I had) because it seemed too obvious. Though that part felt predictable, I kept reading, assuming there would be a twist. But in the end, there was no twist, which made the conclusion less than satisfying. Still, the rapid-fire pacing and edge-of-suspense makes the book a solid thriller that pushes the reader to keep turning the pages. Had I not started reading the novel so late during an afternoon, I would have felt compelled to finish it in a single sitting. The authentic perspective of an educational psychologist—one which Murphy weaves in comfortably and knowledgeably—makes this an authentic feeling read.

The characters themselves are all believable, with lots of detail about things going on in their personal lives that make them feel real. The investigation by both the police and Radcliffe aren’t dependent on any super-sleuth skills. It’s all fairly straightforward logic and an investigation that seems sensible. The very human characters make the story much more real, which is particularly important given some of the difficult moral and emotional topics that this novel tackles.

The Darkest Hours is a solidly plotted, page-turner of a thriller. Murphy does an excellent job of keeping it tightly paced without it feeling forced or contrived, or like the characters are in unreasonable amounts of danger. The peril and tension fit well with the story and the circumstances, and make this novel very easy to immerse yourself in. It’s definitely a book that you should pick up if you are a psychological thriller fan.

I purchased a copy of the book used for this review.