Home » Blog Tour and Review of Resilience by Bogdan Hrib 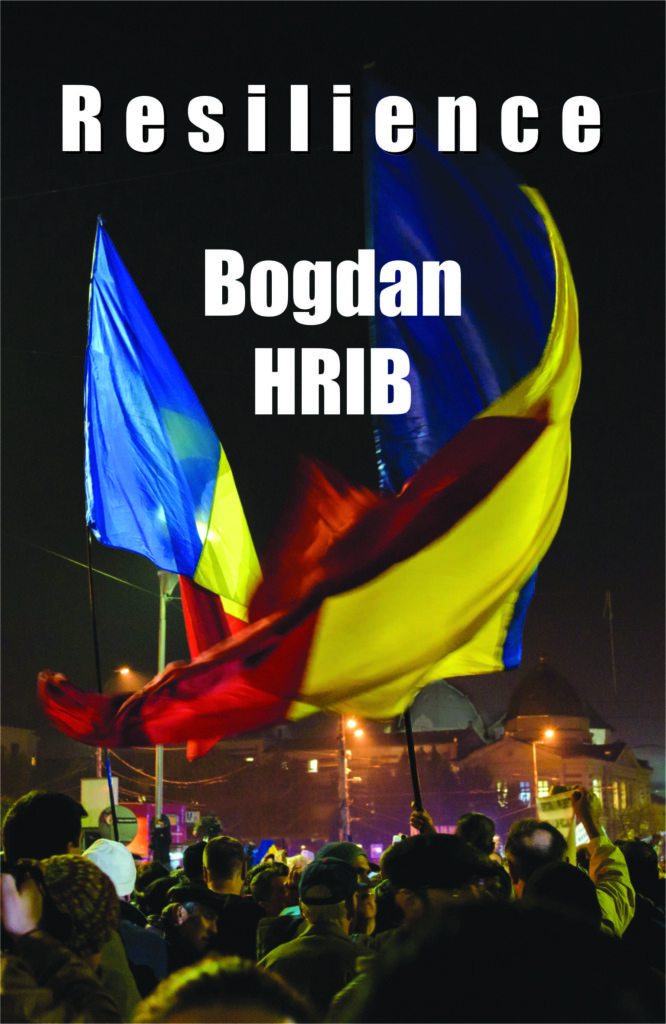 Stelian Munteanu has had enough of fixing other people’s problems: all he wants to do is make the long-distance relationship with his wife Sofia work. But when a notorious Romanian businessman asks him to investigate the death of his daughter in the north of England, he reluctantly gets involved once more.

This time it turns into a tangled web of shady business dealings and international politics. Moving rapidly between London, Newcastle, Bucharest, and Iasi, Resilience shows just how easy and dangerous it is to fall prey to fake news and social media manipulation.

Resilience by Bogdan Hrib is a difficult book to categorize. I jumped in when offered an advance copy for review and participation in the book tour, assuming it to be a usual crime fiction title. It’s no secret that is the focus of this book blog. But just a few chapters in, I realized that Resilience was as much a geopolitical thriller as a crime novel. That’s not a genre I read much anymore.

I admit it. Once upon a time, I was a big Tom Clancy fan. There’s no shame in that admission. Clancy wrote some brilliant political thrillers until losing his touch. Once the point arrived where the stories took a back seat to Clancy showing off how much he knew about the technical aspects of all things military, I lost interest. That’s when I turned to crime fiction. Of course, a good detective novel or crime thriller is almost always about the story and the characters, which I prefer. But I digress. Here there was plenty of a noir vibe to hold my interest.

Resilience opens with the death of a young woman, a junior staffer at the Romanian Cultural Institute; we meet in the first chapter—a death that may or may not be suspicious. Nevertheless, the woman’s father, Pavel Coman, who we learn is a wealthy (but shady) businessman, suspects foul play and employs Stelian Munteanu (the protagonist) to investigate.

Munteanu is an interesting character. The author describes him as “a man with his fingers in many pies,” which we discover is an appropriate description. Munteanu is not a licensed private detective, but a book editor and former intelligence officer who self describes as “neither a detective, nor an editor, nor a spy, nor journalist, but a little bit of each.” Dabbling in private investigations seems a side interest based on his previous occupation.

Munteanu, somewhat reluctantly, accepts the case, mostly because it requires that he travel to England where his wife Sophia lives. Because of her job, the couple lives apart. Munteanu, who feels he never spends nearly enough time with Sophia, takes the case even though he doubts anyone murdered Coman’s daughter because it offers the chance for him time to spend time with his wife in London.

As the story progresses, the mystery surrounding the woman’s death fades into the background as the plot turns more toward geopolitics, specifically Russia’s historic interference in the politics of other sovereign Eastern European countries. Don’t misunderstand. The events at the book’s opening are—in many ways—the start of everything that comes after, but it feels as if the plot is about something altogether more sinister than what we expected. Hrib gives us glimpses into it, but it feels like something is missing. That piece of the puzzle left unsaid or unexplained made me feel I entered the story late and was playing catch-up. Hrib cleverly keeps things somewhat vague for a while and the reader in suspense. We recognize that we don’t have the full story and are left waiting for more.

The plot is imaginative, and the prose well-written, which made me feel the story was well worth hanging in for to the end. But, in all honesty, this book can at times seem a bit destabilizing, confusing, and manipulative once you realize it isn’t what it seems at the start.

Our lead character Stelian Munteanu often gives way to other narrators, notably Anton “Tony” Demetriade, a police detective and Munteanu’s friend that Stelian often turns to for help with his investigation. Demetriade is such a prominent character it seems almost fair to label him the co-protagonist rather than a mere side kick. Other conspicuous narrators are Ionescu, a Romanian secret services operative, and Scotland Yard DCI Harriet Darlow.

Reminiscent of a Robert Ludlum spy novel, Resilience demands concentration from the reader as a host of characters populate the story that we must keep track of as the novel shifts quickly between settings and narrators. The plot features a fair degree of complexity, but once you get past the first few chapters, it’s oddly compelling for that reason.

There is much I liked about Resilience. It’s a twisty read told from multiple points of view by realistic and fully drawn characters. I found the character development particularly interesting, becoming far more attached to some than seemed sensible.

The book also references many contemporary issues that will be familiar to readers—climate change, Russia’s annexation of Crimea, the explosion of social and political activism produced by the internet, increasing migration and its effects, and the influence of “fake news” on politics and social unrest.

While the focus is on the Balkans, the aforementioned contemporary issues helps make the book relevant and relatable across English-speaking markets. This felt particularly relevant to me as an American in this era where the politics of balkanization (identity politics) pursued by corporate media-supported social organizations and movements to shift the balance of political power has fragmented the country into “tribes,” making many Americans hostile and uncooperative with one another.

I enjoyed Resilience even more than expected, especially since I first assumed it would be more of a traditional crime fiction novel. But that’s not at all the case. Instead, the novel is a hybrid crime fiction/political thriller, bathed in browns, shadows, and pale lighting. And the geopolitical circumstances involved are probably one of the best parts of the plot, certainly not expected at the outset; something I didn’t see coming.

Something else I hadn’t realized about Resilience is that it is the sixth book in a series featuring Stelian Munteanu. Typically, I prefer to enter a series with the first book. But, Bogdan Hrib, born in Bucharest, Romania, wrote and published the series in Romanian (obviously), and the English translations began with  Kill the General (2011), the fourth book in the series. Still, I feel the book works well as a standalone.

Resilience has garnered a lot of buzz from reviewers, book bloggers, and bookstagrammers, so I was excited to read it, though I wasn’t sure what to expect. After all, I’d not read Hrib’s books previously, and it is a translation. Unfortunately, that doesn’t always augur well. You’re at the mercy of the translator’s ability to transform not only the language but the tone and underlying nuances of the author’s original style. There were probably times early on that I was aware of reading a translation, but either the phrasing settled, or I became accustomed to the style of the author and translator as I stopped noticing part-way through, giving me confidence that translator Marina Sofia did the original justice.

What’s important is whether I liked this book. Yes, I loved it. I read it in one sitting, and the story kept me turning the pages quickly, keen to learn more. It offers something a bit new—something fresh. And, I found it a cleverly plotted book. While Resilience offers something slightly different than the reader expects at the jump, we learn fairly quickly where our assumptions are incorrect and can then settle comfortably into the story Hrib chose to tell. I loved how he brings his leading characters to life and helps the reader build relationships with them.

While presented in a fictional context, Hrib tackles a range of contemporary and complex issues with precision, challenging us to ponder our own attitudes and beliefs. This book by Romanian author Bogdan Hrib took me out of my comfort zone a bit as it departed from my steady diet of whodunits and crime thrillers. Still, I found Hrib’s writing and storytelling intelligent and easily devoured. I believe the book will satisfy political thriller and crime fiction fans alike.

Many thanks to Corylus Books for the advanced copy of the book used for this review representing my my honest and unbiased opinions.