Exiles by Jane Harper, a story that contrasts light and darkness, and exposes our tendency to see what is expected. Read my full review. 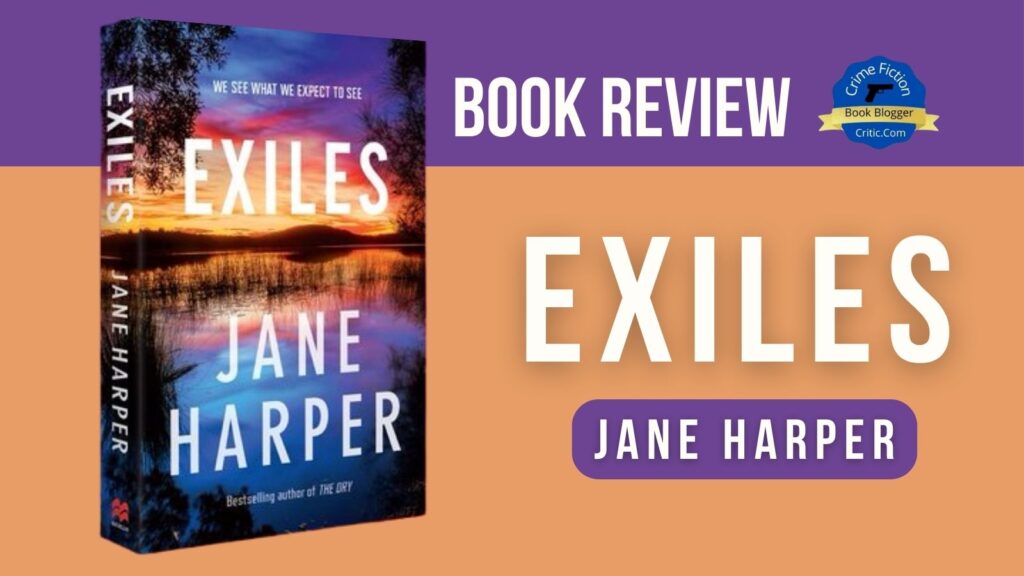 Federal Investigator Aaron Falk is on his way to a small town deep in Southern Australian wine country for the christening of an old friend’s baby. But mystery follows him, even on vacation.

This weekend marks the one-year anniversary of Kim Gillespie’s disappearance. One year ago, at a busy town festival on a warm spring night, Kim safely tucked her sleeping baby into her stroller, then vanished into the crowd. No one has seen her since. When Kim’s older daughter makes a plea for anyone with information about her missing mom to come forward, Falk and his old buddy Raco can’t leave the case alone.

As Falk soaks up life in the lush valley, he is welcomed into the tight-knit circle of Kim’s friends and loved ones. But the group may be more fractured than it seems. Between Falk’s closest friend, the missing mother, and a woman he’s drawn to, dark questions linger as long-ago truths begin to emerge. What would make a mother abandon her child? What happened to Kim Gillespie?

After hearing great things about award-winning Australian author Jane Harper’s writing, I’ve been keen to read her work for quite sometime. So when I saw it was available, I requested an advance copy of Exiles, immediately. It’s the third book in Harper’s Aaron Falk series. I waited a long while to get a copy, but it was well worth it. Exiles does not disappoint.

The book unfolds in three time frames, a week in the present, a year earlier and then three years later at the end. We get multiple points of view, but mostly that of the lead character, Aaron Falk, a seasoned Australian Federal Police (AFP) financial crimes investigator with a calm, unexcitable nature.

Falk returns to Marralee, a small rural town near Adelaide, for the christening of the infant son of Greg and Rita Raco, a couple he is close friends with. Aaron had been in Marralee the previous year (covered in the prologue), when thirty-nine-year-old Kim Gillespie, went missing from the Marralee Valley Food and Wine Festival, an annual event. While her husband was in town having dinner with his parents, Kim Gillespie had disappeared from the festival grounds without a trace, leaving her six week old daughter all alone in a stroller. A festival staffer leaving at the end of the evening had discovered the unattended child, and authorities mounted an unsuccessful search for Gillespie. During the investigation, they discovered the woman suffered from depression and assumed she must have committed suicide by leaping into a reservoir near the back entrance of the festival grounds, but they never found her body. It’s festival time again, a year later, and the woman’s family and friends make an appeal to returning visitors, asking anyone to come forward who might have seen Kim Gillespie or knew something about her movements the previous year, but hadn’t spoken to authorities back then. Since the local police hadn’t definitively resolved the mystery surrounding Gillespie’s disappearance, Falk’s friend, Greg Raco, a law enforcement officer with another agency and the uncle of Gillespie’s teenage daughter, has continued to investigate her disappearance unofficially. And despite Aaron’s reluctance, Raco persuades him to help even though he is on leave for the ATF. While he currently only investigates financial crimes, Falk is a competent and intelligent detective. After talking with various people in the community, he uncovers things about the case no one has yet considered.

While the bulk of the story focuses on Kim Gillespie’s mysterious disappearance without a trace, another thread of the story concerns an unsolved hit-and-run traffic accident that took the life of another popular town resident, Dean Tozer, who had things in common with Gillespie, suggesting the two deaths might relate. But the head of the local police considers the commonalities only the coincidences of small town living where everyone knows each other and has frequent contact. But wait, there’s more—so much more. While the primary driving narrative here is the possibility that Falk can solve the Kate Gillespie mystery and the death of Tozer, Falk is also working to solve some personal issues and working on forming a relationship with Tozer’s widow Gemma, who Falk had met by chance in Melbourne months earlier and had developed an attraction for.

Frankly, Harper’s brilliant imaginative writing blew me away. There is so much going on in the book. Reading it felt almost like playing a game of three-dimensional chess. While the reader senses almost from the start that someone probably murdered both Gillespie and Dean Tozer, Harper doesn’t give us anything solid to go on, but she cleverly encourages and fosters our mere suspicions. In some ways, Tozer’s death becomes more of a mystery than Gillespie’s disappearance. Maybe it was an accident and maybe not. And the deeper we get into the book, the more we size up the cast of characters wondering who might have murdered Kim and Dean and why. The list of suspects grows quickly, even though Harper never gives us any clues that there was foul play in either incident until the very end. I wasn’t even close to solving the whodunit part when Harper, after several twists, finally makes the revelation. And for good measure, she tosses in one last twist after that.

Aaron Falk has a lot of baggage, which he is also working to resolve. And I became more than a little frustrated with him over his indecision and often inept pursuit of Gemma when it seemed clear they should get together. But Falk, a mixture of subtlety and pathos, is a character I liked immediately and seems a real person. Harper also expertly fleshes out the rest of the cast who seem like people I can easily imagine might inhabit rural Australia. All are relatable and I felt like I got to know all the characters well by the end of the book. Unlike other Australian authors I’ve read, who use descriptions of the Australian landscape to establish a sense of place, Harper relies more (at least in this book) on using the Australian manner of speech in both dialogue and inner thoughts of the characters to accomplish that. It’s effective and makes the reader aware the story takes place in Australia, yet perhaps not as effectively as Australian writers, who descriptively transform the sense of place into almost a character in its own right. The Australian Mystery Road movies and television series are good examples of this. And I’ve read several novels where the authors used similar techniques in their prose. Harper’s technique isn’t necessarily bad, just different.

Ultimately, all the plot threads converge and details get spelled out and characters’ motivations get explained, though Harper sustains the overall air of mystery and a satisfying level of suspense until the end. I’m not a reader of the romance genre, but felt the generous helping of a timeless romance that develops between Aaron and Gemma was far and away one of the strongest parts of the story. Especially since their happy relationship stands in such sharp relief to the darker relationship between two other major characters.

The things I’d heard about Jane Harper’s aren’t wrong. She is a fine writer and excellent storyteller who engages the reader and holds your interest. Exiles is a story with twists predicated on major coincidences and reckless decisions, a contrast between light and darkness, and the fallacy of seeing only what one expects to see. I read the book in one sitting, and now of course want to read the first two books in the series. Highly recommended for fans of mystery and suspense.

I received an advance copy of the book for review purposes.

Order Your Copy of Exiled on