City of Angles by Jonathan Leaf, a pleasing, plausible modern noir yarn set against the backdrop of a brutally candid exposé of the L.A. film industry and its narcissistic and duplicitous celebrity culture. Read my full review. 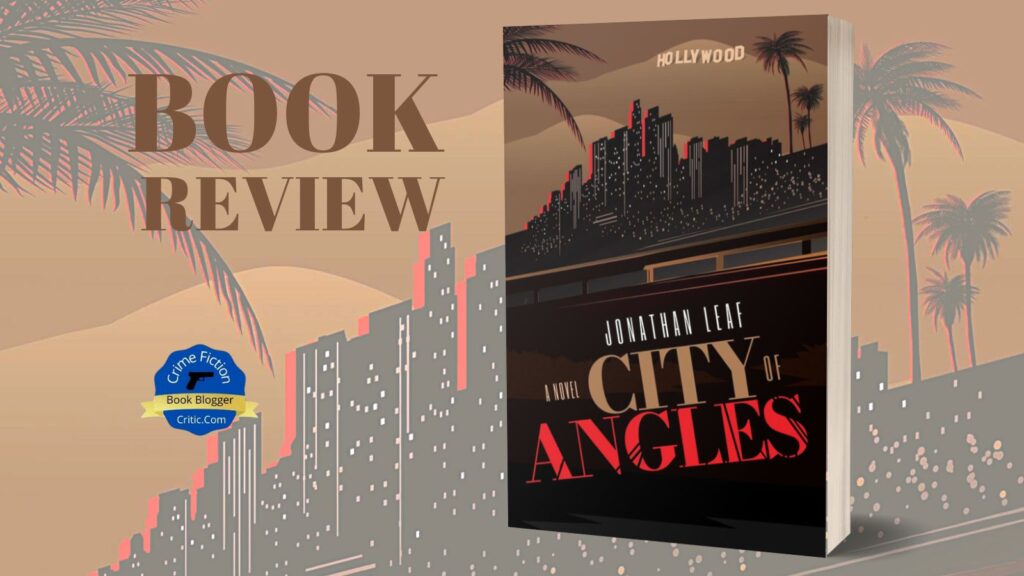 A smart and sexy modern noir set in the steamy underbelly of 21st century Hollywood.

Billy Rosenberg is a workmanlike screenwriter who finds his fate intertwined with would-be starlet Vincenza Morgan in this fiendish and sharp tale of a city where Image always trumps Reality.

Filled with plot twists, wicked humor, and vivid commentary on celebrity culture, author Jonathan Leaf has skillfully crafted a compelling romp which manages to weave murder, drugs, sex cults, modern relationships, and naked ambition together into a tale that lays bare the real Los Angeles—a city where even the angels have an angle.

Finding a corpse in the trunk of her car with no idea where it came from isn’t ideal. Vincenza Morgan understands that and that she needs to phone the police. Yet she has no time. She has an audition to attend and after twelve years in Hollywood, Vincenza knows even the existence of a cadaver in her trunk isn’t an excuse to miss an audition.

“She [Vincenza] had called off another tryout three months earlier when she was in the grip of a high fever, and afterwards, her agent had scolded her in a way meant to leave no doubt that he was open to dumping her as a client. There was no subtext. She was not to miss an audition again, not if she were receiving chemo and confronted by the amputation of a limb.”

She would worry about the stiff later, reminding herself that in L.A.:

“You went on with things, playing your role, pretending that everything was fine when a catastrophe was happening.”

And so begins City of Angles. But finding a body in the trunk isn’t even the strangest thing that happens in this entertaining, often humorous, unusual crime novel by Jonathan Leaf.

After the audition, which Vincenza thinks went well, she still doesn’t go to the police. She wants to, but how would she explain it? Then, when she finally re-opens the trunk, she makes another startling and upsetting discovery. She promptly recognizes the stiff is her sometime lover, Tom Selva, a prominent actor. And the revolver someone used to shoot him to death is laying on his chest. After regaining her composure, Vincenza calls David Clarkson, the “fixer” for the Church of Life, a cult Vincenza belongs to. But when she reaches Clarkson, something he says unnerves her, and she hangs up abruptly. Unsure what else to do, Vincenza attempts to return to her usual life. Going to work at her part-time job at a marijuana dispensary, going home to her apartment, and waiting for the hoped for callback from the recent audition, while hauling the corpse of her dead lover around in the trunk of her car. Her instincts tell her to avoid Clarkson and the church. But then she notices, to her dismay, acolytes of the church following her and she fears trying to abduct her. Is it the church attempting to frame her for murder? Who can she call for help?

At its center, we have a murder, and a mystery to be solved. But, City of Angles is far from the usual crime fiction story. There is comedic relief aplenty, the type of humor that reminds me of that found in Joseph Wambaugh’s novels. The plot produces a plausible yarn, someone framing a young woman for murder for reasons that are unclear. All we know for sure at the beginning is Vincenza is innocent, and the threat the authorities may charge her with a murder she didn’t commit provides palpable tension. Leaf does a good work with characterization, but also unusually. We observe the characters and spend time inside their heads, but are never certain we truly get to know them. Partly, that’s because they seem more caricatures than real people. And for this novel, I think that’s okay because I believe that’s the point. Leaf’s characters represent film industry insiders, actors, and the leaders of a cult. These aren’t “real” people, but people playing roles within a social structure “where image always trumps reality.” So, while the characters may not be relatable, and few are particularly likeable, they are realistic within the context of the setting. They represent many within the film industry’s narcissistic and duplicitous celebrity culture.

No doubt some of the fun that Leaf pokes at the Hollywood types is tongue-in-cheek. Yet you get the sense that much of the commentary which pulls back the glitter to reveal the ugliness that lies beneath, hits close to the truth for an industry that presents itself to the public as a dream factory that produces optimism, romanticism, and happy endings. Yet statically, only two percent of working actors make enough money to earn a living. So, the truth is closer to the lyrics Erykah Badu sings in a song about the dark side of Tinseltown. The lyrics speak of how Hollywood can be a place of false promises and shattered dreams, about how people come to Hollywood with dreams of becoming famous, but often end up broken and alone. In this novel, I think Leaf presents that truth and helps us understand why it is so.

While the murder mystery might be unremarkable, it’s the insider look into Hollywood culture, the meat of the story, that’s most intriguing and where this novel truly shines.

I received an advanced copy of the book from the publisher for review purposes.

Get Your Copy of City of Angles on