Blue Book by Tom Harley Campbell, superb storytelling about the unraveling of a government coverup that feels uncomfortably close to reality. Read my full review. 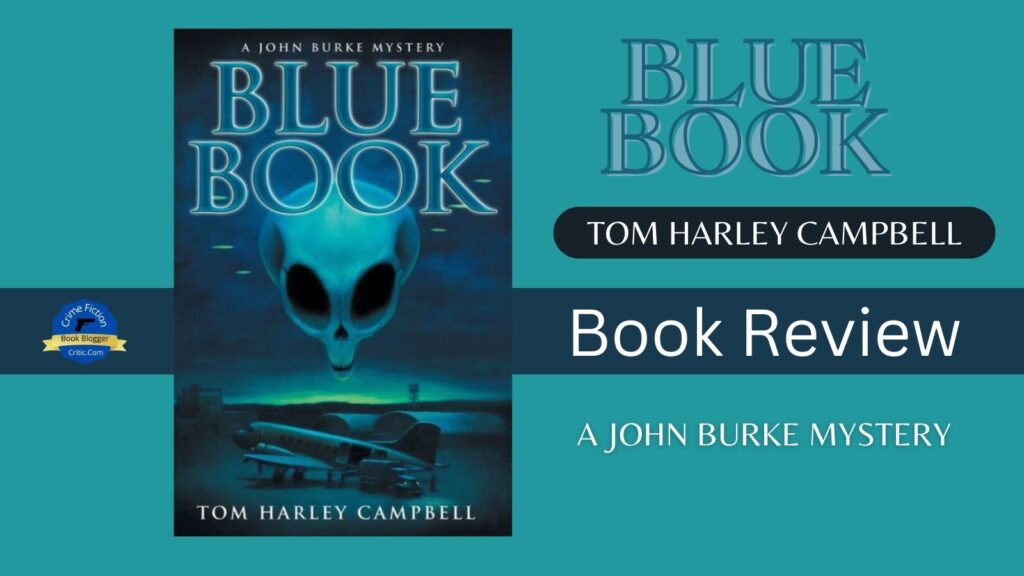 Homicide detective John Burke is lured out of retirement when a young man arrives in Dayton, Ohio with a tantalizing clue to a haunting cold case – the unsolved death of a Black cop from Mississippi. As Burke digs into the case, a trail of unexplained deaths leads him to nearby Wright-Patterson Air Force Base, where Project Blue Book – the U.S. government’s long since shuttered study of UFO phenomena – rears its ugly head. Burke realizes he could be next.
Cayuga Street Press (2022)
Categories Mystery & Detective
Tom Harley Campbell | Pub Date Oct 03, 2022 | ISBN 9781681114774 | 262 pages

This was a standout read for me. Campbell has created a strong cast of diverse, fully rendered characters, including our likeable lead, John Burke. I wasn’t sure what I was getting when I accepted Blue Book for review after reading the summary and learning UFO phenomena is part of the storyline. However, I discovered quickly that the novel is a traditional crime fiction mystery tale, and that’s right up my street.

The book opens with a brief prologue that gives us a foreshadowing of what’s coming. Then we meet an eighteen-year-old young man from Mississippi arriving in Dayton, Ohio. Alex’s father, Michael Johnson, who was a police officer from Hattiesburg, died during a visit to Dayton four years previously. Alex discovered something he believes might convince the police to re-open the investigation into his father’s death and after arriving in the city, makes his way to the police station.

Unfortunately, Captain John Burke, the detective who investigated the case, has since retired. But Alex meets Burke’s son, Kevin, who has taken over the homicide division and the detective puts Alex in touch with his father. After Alex shows John Burke what he found, Burke is interested and willing to help. While the police had speculated that Alex’s father’s death was accidental or suicide, it was the case Burke never felt he had truly solved. He returns to Mississippi with Alex to interview a man, Charles Robinson, he hadn’t known about or spoken to during the original investigation that Alex convinces him might provide information about why his father had been in Dayton when he died. Robinson reluctantly tells Burke a shocking story. His father, Henry Robinson, also died under suspicious circumstances, and Robinson believes his father’s death relates to a long shuttered government program, Blue Book, that studied UFO phenomena his father had commanded while serving as a senior officer in the Air Force.

Burke returns to Dayton with the name of a man who had been a close friend of Henry Robinson and a scientist who had also worked in the program. When Burke visits the man, Martin Novak, the man tells him a story that shocks him even more. Novak had given Michael Johnson information entrusted to him by Henry Robinson that might have got Michael killed by operators from a clandestine government contractor working for a government intelligence agency. Convinced Johnson’s death was a murder as he’d always suspected, and that it connects to the death of Henry Robinson, Burke resumes his investigation as a private investigator. He forms a theory that the secretive government contractors, under the auspices of the CIA, killed the men to “protect information vital to national security.” As Burke digs deeper into the mystery, another murder occurs and Burke soon realizes he may be in over head, facing off against shadowy and powerful government entities willing to murder civilians to safeguard their secrets.

While I found the UFO aspect of the plot an intriguing twist, an interest in UFO coverup conspiracy theories isn’t required to enjoy reading this riveting tale. The book is far more about people solving crimes than an episode of The X-Files type of story. This is a book for anyone who enjoys a good mystery. However, for those who enjoyed The X-Files as I did, the UFO aspect only makes Campbell’s story even more fascinating. Campbell’s writing style is accessible and he effortlessly grips and hangs on to the reader’s interest. The dialogue is sharp and realistic.

Campbell offers us a well-plotted, entertaining novel with a gripping story that is not only plausible, but almost uncomfortably realistic. If you entertain UFO conspiracy theories or not, any reasonably educated person who keeps up with current events knows that unelected bureaucrats who show no fear of elected officials have amassed and wield massive amounts of power since the 9/11 attack that they jealously guard. Remember Edward Snowden? Not to mention Senator Chuck Schumer’s infamous quote from 2017: “Let me tell you: You take on the intelligence community — they have six ways from Sunday at getting back at you.”

Blue Book is superb storytelling and suitable for all crime fiction mystery fans. I easily read in a single sitting, and highly recommend this book.

I received a copy of the book from the publisher for review, but have since purchased a copy for my personal library.

Get Your Copy of Blue Book on