Home » Book Review: Not My First Rodeo: Lessons From the Heartland by Kristi Noem 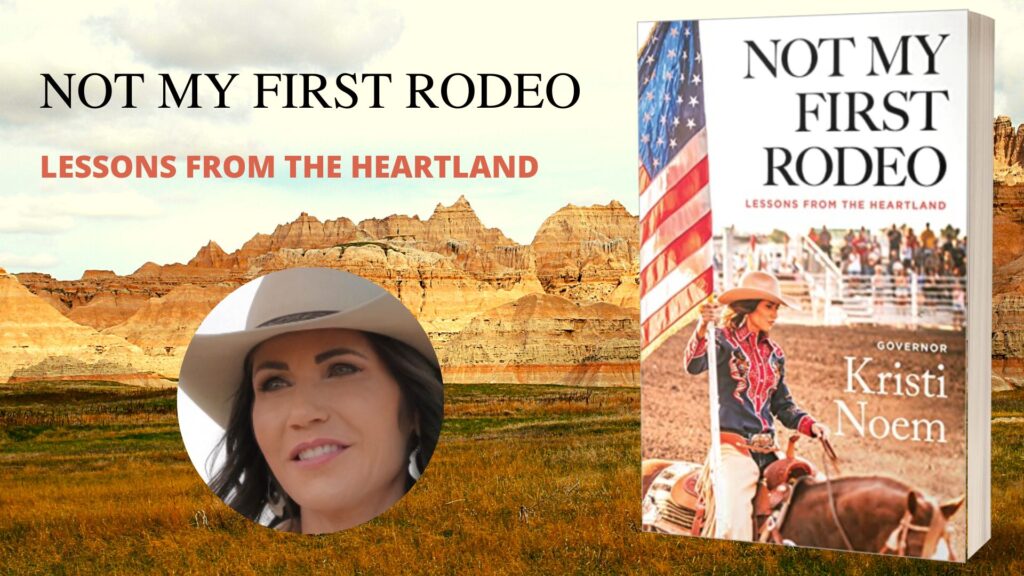 Spoiler alert. This review is for a book with absolutely nothing to do with crime fiction. It’s a memoir, in fact, and evidence that I sometimes go beyond a steady diet of mysteries and thrillers. So, why am I posting it on this blog devoted to crime fiction book reviews? I hope this review will encourage others to read this book because I read and came away from it so inspired and impressed.

NOT MY FIRST RODEO: LESSONS FROM THE HEARTLAND 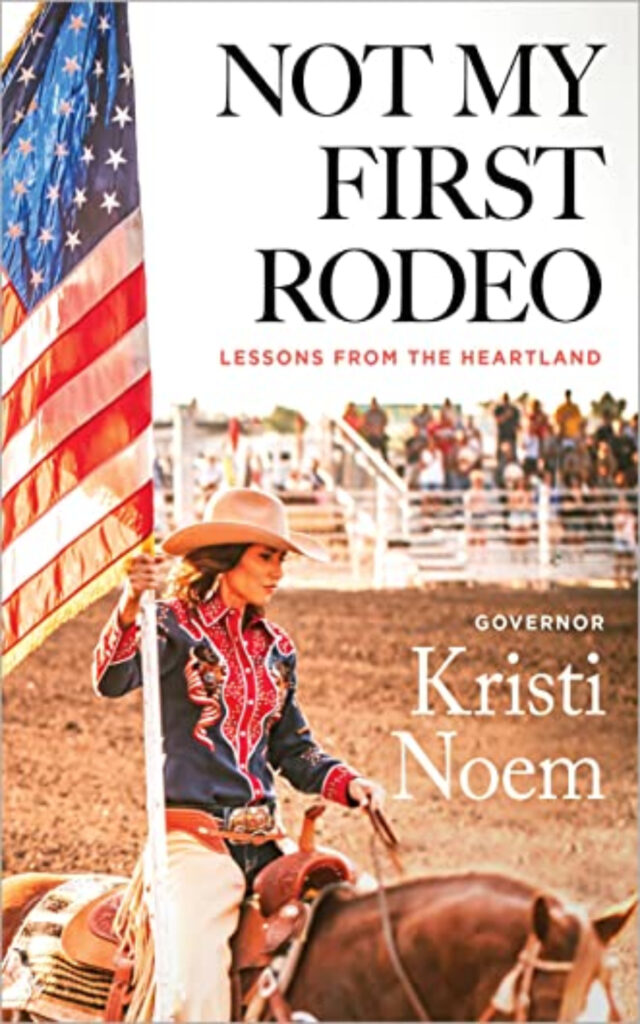 “South Dakota governor Kristi Noem tells her rough and tumble story of growing up on a ranch, and how a blessed life of true grit taught her how to lead.

“We don’t complain about things, Kristi. We fix them.” Taking her father’s words to heart, South Dakota’s first woman governor Kristi Noem shares heartfelt – and heartbreaking – lessons on making things right in the world, from her childhood on a farm in the vastness of rural America, to the marbled halls of Congress, to the national spotlight amid a global pandemic.

From humorous barnyard battles with feisty cattle and rodeo horses, to the tragic and untimely death of her larger-than-life father, to her decision to her decision to return and run the farm and ranch with her family, Noem invites readers into a life defined by work, faith, and helping others. Noem’s reflections are offered in the familiar, unvarnished voice of a woman who later defied Washington’s most powerful politicians and led the people of her small, hardscrabble state through natural disasters, the pain of a global pandemic, and the fear and turmoil that gripped the nation after.

While filled with plenty of candid observations and refreshingly frank assessments of the country’s leading figures, the memoir’s most powerful moments nevertheless come from honest glimpses into marriage, motherhood, and leadership in an unpredictable time.

Far from a book about politics, Not My First Rodeo is the story of a life lived so far – with characters as richly textured as the Black Hills, and reflections as gentle and powerful as America itself.”

“I do not believe there are ‘women’s issues’ any more than there are ‘men’s issues.’ There is, however, a woman’s perspective on every single issue…I’ve offered that perspective—whether people asked for it or not—from the barnyard to Congress.”

Former congressman and current governor of South Dakota shares her early life growing up in farm country in the eastern part of the state, her journey into politics, her time in congress, and her first term as the first woman to serve as governor of her state.

It’s not surprising to learn that Kristi Noem grew up a confident kid with an independent streak and a “We don’t complain about things, we fix them” attitude. After all, it takes grit and courage to survive and thrive in contemporary American politics.

We witnessed Governor Noem’s hands-off approach to pandemic restrictions elevate her to national prominence when the corrupt, biased corporate media criticized her at every turn. But the results her approach achieved vindicated her and proved them all wrong. Now we get to read how growing up on her family’s farm instilled the very traits that make her a proactive, wise, and effective leader.

As the author amply shows, her can-do attitude sprang from her family’s influence, faith, and a strong work ethic developed since childhood. Noem has faced adversity at times, leaving her wondering if she was up to the challenge. Nevertheless, she persisted, successfully taking over and operating her family farm and businesses after her father died before circumstances thrust her into politics.

With uncommon candor and refreshing humility, she recounts how the tragic loss of her father led to her fateful decision to run for her first political office. But we cannot dismiss Noem as just another ambitious politician despite her natural leadership abilities and political acumen. It’s clear being a wife, mother, and grandmother is as much a priority as any office she holds, and she strikes a healthy balance which is no small feat.

Noem has served her state with honor, grace, and determination. Even though a former congresswoman and current governor wrote this book, it’s not a book about politics. Instead, it’s a memoir about “a wife, mother, and grandmother who has learned a thing or two about politics in America.” You won’t find any of the self-serving, self-aggrandizing tripe you may have read in some of the other recent memoirs written by other political figures.

To say this book is inspiring would be an understatement. Noem’s story gives hope to other Americans who share her values and beliefs when we desperately need it. It isn’t what Noem tells you about herself that makes you come away from this book admiring her. It’s the straightforward way she explains what she believes. She appreciates and values the legacy of freedom our founders gifted us with and embraces the true history of our nation, not the false revisionist version pressed by those who seek to impose upon Americans a culture and an ideology completely foreign to our nature.

2 thoughts on “Book Review: Not My First Rodeo: Lessons From the Heartland by Kristi Noem”