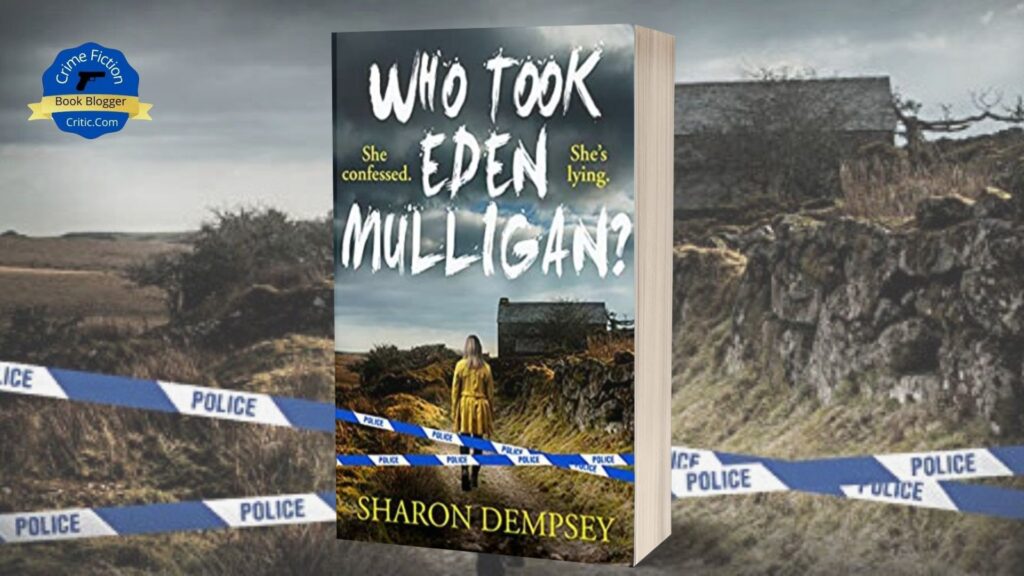 Published by Avon Books UK, a division of HarperCollins

Those are the words of Iona Gardener, who stands bloodied and panicked inside a local police station as she confesses to the murder of four friends she shared a cottage with outside Belfast.

In the cottage’s back garden, the police find five ghastly old dolls hanging from a tree. Inside the cottage which looks like a proper slaughterhouse scene, someone had scrawled the words “WHO TOOK EDEN MULLIGAN?” on a wall, suggesting the murders are somehow connected with the disappearance of Eden Mulligan, a mother of thirty-three with five children, who went missing years before during The Troubles.

There’s something really powerful about this story. For me, it wasn’t as much about the mystery… who committed the murders, or why. It was the sense of foreboding about what I might learn about the connection with the Eden Mulligan disappearance and the edge-of-your-seat suspense.

Thematically, the focus of this book is on relationships–including the relationship we have with ourselves. It’s underpinned by powerful and confronting themes of honesty and lies; of shame; and of messed-up lives and whether redemption is always possible.

When we meet Rose Lainey, a forensic psychologist, she’s just reluctantly returned to Belfast for her mother’s funeral after a fifteen year absence. Rose had fled Belfast at eighteen to escape her domineering mother and the troubles in Belfast at the time, becoming estranged from her family. During the visit home, Lainey reconnects with an old friend, DI Danny Stowe, who is to investigate the murders Iona Gardener confessed to committing and the recently reopened Eden Mulligan cold case. He convinces her to take a leave of absence from her position in London to consult on the twin investigations.

It’s the Eden Mulligan cold case that brings Rose’s childhood memories to the fore. They’ve always been there and evidenced in the secretive personal life she’s led, but now delving into the decades old disappearance of Eden Mulligan forces her to confront the events of the past.

DI Danny Stowe, recently separated from his wife, has thrown himself completely into his work to mute the anguish of his failed marriage. But Rose’s reappearance in his life rekindles feelings he’d felt for Rose since college that go beyond just close friendship.

I very much liked Rose, a wonderfully complex character. Having spent her entire life running away from her childhood, a source of shame for her, she learns she has never been able to put it all behind her. And, now back in Belfast, she realizes she has missed home more than she’s ever admitted to herself. Of course, things and people are never as they seem, and soon Rose learns she’s not the only one with secrets.

Early on, Rose and Danny determine that Iona Gardener hadn’t killed her friends. The evidence at the scene reveals that’s impossible. But, for some reason, Gardener felt compelled to make the false confession. The bulk of the novel revolves around their investigation of the murders at the cottage as they attempt to make sense of the graffiti scrawled on the wall and to determine whether there is an actual connection with the decades old disappearance of Eden Mulligan.

I felt the author may have over complicated things a little with the attention devoted to the thread involving Rose’s mother Evelyn’s suspected involvement in the IRA that added little to the central plot and—though important to understanding Rose’s estrangement from her mother—felt somewhat irrelevant. That aside, there’s plenty to like about Who Took Eden Mulligan? by Sharon Dempsey. She times the big reveal and climax perfectly. I certainly felt a sense of closure.

This is an unpredictable, face-paced, and engaging read, and one I’d certainly recommend.

Who Took Eden Mulligan? was published by HarperCollins (Avon UK) and is now available.

I purchased an electronic copy of this book from Amazon used for this review.