The Hypno-Ripper Edited by Donald K. Hartman—Two fictional stories capitalizing on the possibility that hypnotism played a role in the Ripper murders.

Two stories written in the late 1800s about Jack the Ripper, arguably the most infamous and mysterious serial killer of all time. 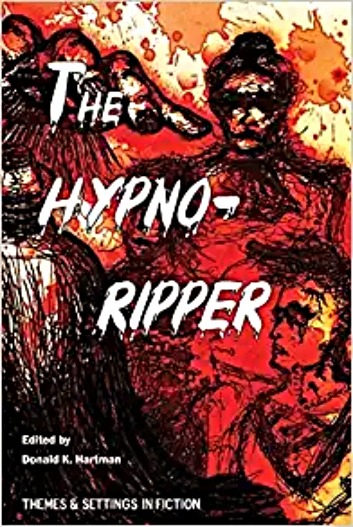 This is the second volume in the “Hypnotism in Victorian and Edwardian Era Fiction” series, published by Themes & Settings in Fiction Press.

The two stories collected here were published during the time of the Jack the Ripper killings, and they are among the earliest fictional accounts dealing with the Whitechapel murders. Both of these stories have Jack the Ripper being an American, who traveled from New York City to London to commit the murders, and the Ripper commits his crimes while under the influence of hypnotism. The first story, “The Whitechapel Mystery; A Psychological Problem (“Jack the Ripper”),” is a novel authored by N. T. Oliver, and originally published in 1889 by the Eagle Publishing Company. The second story, “The Whitechapel Horrors,” is a short tale, published anonymously in two American newspapers, shortly after the murder of Mary Jane Kelly in November 1888.

Also included is a lengthy biographical profile on Edward Oliver Tilburn. “N. T. Oliver” was a pseudonym for the highly interesting Edward Oliver Tilburn. Besides being an author, Tilburn was a minister, actor, lecturer, secretary for several cities’ Chambers of Commerce, snake-oil salesman, Christian psychologist, as well as an accused embezzler, shady real estate broker, and a self-proclaimed medical doctor.

Jack the Ripper is likely the most notorious of all serial killers, given that there have been more books written and movies made about him than any other infamous murderer. He terrorized London in 1888, killing at least five women and unusually mutilating their bodies, indicating that he had a substantial knowledge of human anatomy. Unfortunately, Jack the Ripper was never captured—or even identified. In The Hypno-Ripper, a collection of two fictional stories written in the 1800s during the time of the Ripper murders, editor Donald K. Hartman introduces us to the fascinating possibility that hypnotism played a role in the Ripper murders.

This is a book within a book. We’re first introduced to The Whitechapel Mystery; A Psychological Problem (“Jack the Ripper”) by Dr. N. Y. Oliver (pseudonym), a novella, followed by a short story, “The Whitechapel Horrors” by an anonymous author. The book opens with a foreword explaining the Ripper by Rebecca Frost and concludes with an interesting theoretical note by the editor, where Hartman speculates on the possible identity of the anonymous author of the short story with biographical information.

This review was a tad challenging to write as I moved through multiple impressions while reading the book.

I quite enjoyed the opening novella. The author gives us a very complicated character in John Philip Dewey, an up-and-coming and dedicated nineteenth-century New York City police detective. Dewey’s supervisor assigns him to investigate a daring bank robbery where it seems almost impossible to imagine how the thief pulled it off given the complete lack of physical evidence at the scene. But in time, Dewey ferrets out the thief’s identity and determines the culprit, a noted doctor and mesmerist (or hypnotist), used hypnotism to facilitate the robbery. But before Dewey can locate the perpetrator and affect an arrest, the man boards a ship for England. At the last minute, Dewey manages to board the ship, where he first encounters the mesmerist and then falls under the man’s powerful spell. Determined to arrest the doctor once the ship arrives in London, Dewey strangely finds himself incapable of doing so. Then falling ever more deeply under the mesmerist’s control, Dewey becomes actively involved in the Ripper murders.

While an interesting read, I struggled with the story’s lack of realism. For example, medical science says hypnotized people are not mindless automatons subject to the hypnotist’s bidding. It is extremely difficult to get a hypnotized person to do anything against their moral principles. Given how dedicated and professional a detective Dewey is characterized to be, it requires total suspension of belief if we’re to accept the mesmerist has the power to take control of Dewey’s mind completely and mentally coerce him into doing things we can’t imagine such a man doing.

While a well-written and gripping piece of fiction, I confess I felt the novel seemed a tad predictable and too unrealistic. However, there’s a final twist that made me feel everything is not as it seems. Or it actually is. Or something. Regardless, the story is intriguing, macabre, creepy, and sometimes just plain weird.

“The Whitechapel Horrors” short story also incorporates hypnotism into the Ripper legend mix, but with a different twist. Rather than a man being hypnotized against his will by a powerful mesmerist, an American named Charles Kowlder falls under unintended self-hypnosis due to his rabid fascination with the Whitechapel murders and curiosity of the killer’s identity. Kowlder happens to be in London on business at the time of the murders and becomes enthralled with them while already suffering from mental distress. Here again, hypnosis takes a role in the murders.

All in all, I found The Hypno-Ripper entertaining and well worth the time I spent reading the book. Anyone who enjoys a good serial killer story that doesn’t find archaic Victorian-era style English off-putting, especially those for whom Jack the Ripper tales hold fascination, should enjoy reading the book.

The Hypno-Ripper, edited by Donald K. Hartman and published by Themes & Settings in Fiction Press, is available in paperback and Kindle electronic versions.

The publisher was kind enough to offer me a print copy of the book for review, but since it was available as a Kindle Unlimited selection, I chose to read the electronic version for this review.